To Do: Weekend of September 6th-9th 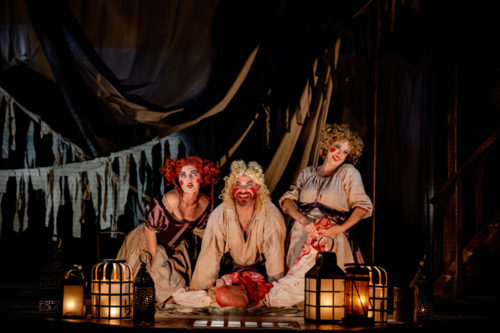 A Restoration version of Macbeth has opened at the Folger.

I love a short week. It feels like we just started and Bam! Another weekend is upon us. How shall we observe it?

Tonight, take in the Folger Theatre’s adaptation of Macbeth as it was interpreted by Sir William Davenport during the Restoration. The Restoration period of theatre began in 1860 when the monarchy was restored to power and the theatres were reopened after having been closed for 18 years. (So what did the common folk do with their spare pennies? There is only so much bear-baiting a girl can take.) This new era arrived with some changes, including women playing women’s roles. While we are typically quite reverent to the Bard’s word, they were a little fast and loose during this period. Ian Merrill Peakes and Kate Eastwood Norrris play the dastardly leads. The show runs through September 23rd.

Fridays are almost always great, but in NOMA in September they are labeled Feel Good Fridays. You can start the day with free coffee at either 2nd and N by the Metro stop or at CNN plaza at 810 1st Street NW. Or you can bring your lunch over to the corner of First and Pierce NE at noon for some live music, games and other things all courtesy of the NOMA BID.

Want to be in a MASN commercial? Show up to the Bullpen from 5-7 p.m. and wear your most spirited or craziest getup and you could have your 15 minutes of fame tomorrow!

The Union Market Drive In offering this month is The Lion King. If you Hakuna Matata yourself over on foot, it’s free. If you drive in to the Drive In it is $10 per car and it is best to book online. The film begins at 8 p.m. but the lot will open by 6 p.m. and close by 7:30.

Saturday, start your morning off right with the Capitol Hill Clean-Up. This new yet solid tradition started back in April and you can read more about it here. Show up by 9 a.m. at The Pretzel Bakery, 7-Eleven, Trusty’s, Capital Candy Jar or Congressional Cemetery and go from there!

Celebrate the gone but not forgotten, beloved Nationals player Jayson Werth at the Jayson Werth Appreciation Day as the Nats take on the Cubs at 7:05 p.m. I do miss him so. Sob! Some of you fans might want to drown your sorrows in eating delicious food from around the world at Taste of the World. The special ticket gets you into the pre-game festivities with international food and drink samples.

Sunday afternoon at 2 p.m., enjoy an outdoor garden concert by the Irish Breakfast band a group of musicians who meet first for a potluck breakfast followed by a rehearsal of traditional music. They will be joined by dancers with the local Irish dance school taught by Shannon Dunne.

Bring the kids to the Hill Center at 3 p.m. for a performance by SuchNSuch Experiment. The performance includes music and puppets and focuses on a successful start to the school year. The event if free but you should register in advance here.