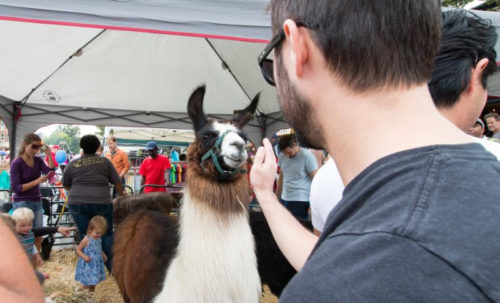 Fall has officially arrived! No matter whatever the temperature actually is, there will be pumpkins and hay bales everywhere until we decide to hang the mistletoe. How shall we autumn this weekend?

Tonight, journalist Bill Press who is frequently seen at the Hill Center interviewing big shots will be the star of the show as he discusses his new book, Trump Must Go: The Top 100 Reasons to Dump Trump (And One To Keep Him). The topic seems self-explanatory. The event is free and open to all. Wine and light refreshments will be served. Register in advance here.

Friday will be the final Cinematery of the season at Congressional Cemetery featuring The Sixth Sense. It was originally rained out but the forecast seems dry so enjoy! The gates will open at 6:30 and the screening will begin at about 8 p.m. It is a BYOB and food and seating affair and a $10 suggested donation will be taken at the gate.

Union Market hosts Politics and Prose Latinx Authors during the month of October and this week features Ecuadoran Gabriela Alemán with the first of her novels to be released in English. Poso Wells is described as an ec0-feminist noir thriller. Sign. Me. Up. The reading begins at 7 p.m. and there is no registration required.

Saturday is the Annual Barracks Row Festival which officially kicks off at 11 a.m. The day will be filled with petting zoo, performances, a Jack Russel terrier performance, music, a donkey parade, skateboard demos, arm wrestling with DC Roller Girls and a meet-and-greet with volunteers from Lucasfilms. Plan accordingly.

That afternoon, The Salt Line attempts to reignite the fierce Oyster Wars of the past but not really. Tbh, it’s more like a party hosted by the riverside restaurant and co-hosted by Other Half Brewing. Ticket price will definitely include oysters and tastes from many area chefs as well as a cash bar. There will be entertainment throughout the afternoon and a portion of the proceeds will go to support the Anacostia Riverkeeper and the Oyster Recovery Partnership. Tickets are $45-$65 and the fun starts at 4 p.m.

Keep the party going at Art All Night: Made in DC a free overnight art festival that begins at 7 p.m. and ends at 3 a.m. Sunday. H Street is one of the eight Main Street neighborhoods hosting the event. The Anthology apartment building, the Atlas Performing Arts Center, and the Starburst Plaza are the hubs where you can get your night started. Click here for more info.

Sunday is the Hill Center’s annual Family Day from 2 p.m. to 6 p.m. Given the building’s origins as a Civil War Naval Hospital, there are Civil War era activities planned and perhaps an appearance by Abraham Lincoln. There will also be the usual balloon animal and face painting as well as family-friendly performances. The events are free but register in advance here.