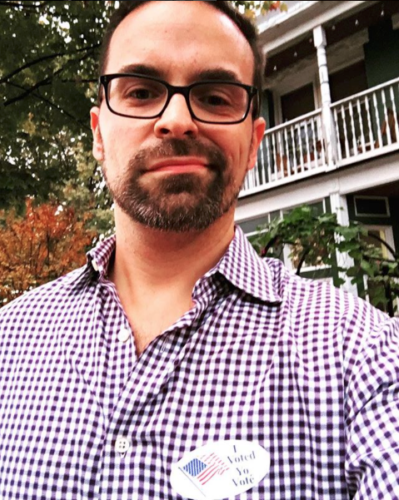 Our buddy and former THIH writer Jon Penndorf voted. Did you? (Photo via Instagram)

Welp. Looks like the blue wave was more of a kiddie pool wave, but hey! You can find out election results bey clicking here! Congratulations to the winners, among them Councilmember Charles Allen and new SBOE Ward 6 representative Jessica Sutter, who defeated incumbent Joe Weedon. A special shout-out to At-large Councilmember and Ward 6 resident Elissa Silverman as well. We had a few contested ANC seats this go-around, so congratulations go out to the following people: Mike Soderman, ANC 6A03, held on to his seat over challenger Ramin Taheri. Ruth Ann Hudson prevailed over Alan Chargin in ANC 6A05. Steve Holtzman is the new commissioner in 6B05, defeating Taylor Kuether. Joel Kelty beat out Chad Ernst by 31 votes. In ANC 6D, Anna Forgie beat Cara Lee Shockley in 6D02. Anthony Dale beat the incumbent, Roger Moffatt, in 6D05. Finally, in 6D07, Edward Daniels beat out Brant J. Miller and Patrick Witte. For our friends in Rosedale and Trinidad/Ivy City, congratulations are in order for Tamara Blair in 7D01, Ryan Linehan in 5D01, Jason Burkett in 5D06 and Sydelle Moore in 5D05. Congratulations to all!

If you’re a new ANC commissioner, won’t you add us to your distribution list? info@thehillishome.com. Thank you!

On to newsy links:

A Zinke impersonator was blocking the street. Profanities were exchanged, the police was called, the mystery car vanished. Lesson? Don’t mess around with the 100 block of Kentucky Avenue SE. Washington Post

Cafe Fili is opening in the Station House building and District Cuisine has the info.

Frozen Tropics has information on a stabbing that took place near the Starburst intersection on Monday afternoon.

We have peak appreciation, 20002. Urban Turf

PoPville has info on the helicopter flying over #HillEast last night.

DC General closed quietly last week; so quietly, in fact, that neighbors who’ve been asking about it found out via Twitter. Hmm. Curbed DC

Two date spots in our area get the nod from Fritz Hahn as places where romance will thrive without breaking the bank. Going Out Guide