Readers of my column will know of my obsession with old Washington guidebooks– in particular, what they felt was important to write about Capitol Hill. Therefore, imagine my pleasure in finding a book with the incredibly unwieldy title, Historical Sketches of the Ten Miles Square Forming the District of Columbia: With a Picture of Washington, Describing Objects of General Interest Or Curiosity at the Metropolis of the Union: Also, A description of the River Potomac – its Fish and Wild Fowl; the proposed Route and Plan, of the Chesapeake and Ohio Canal, from Georgetown to Pittsburgh; and an Account of Mount Vernon. Together with Public Documents and Statistical Facts, Touching the Affairs of the District.

Really, the title was all I needed. The fact that it was published in 1830, however, made it even more interesting. While there are some travelogues that describe Washington, or the trip there, previous to the publication on this tome, this book is, as well as a search through the Library of Congress holdings can determine, the first actual guide to the city. That the writer, one Jonathan Elliot, was buried in Congressional Cemetery became the icing on this cake.

The title is not the only thing padded in the book. It is a solid 550+ pages, but it manages to do that by reprinting the entire acts of cession from both Maryland and Virginia that turned over the land to the federal government; some 40 pages on just the Potomac; and a list of what federal employees, down to watchmen in the Treasury Department, earn.

But much more interesting is what it has to say about Capitol Hill. Unsurprisingly, about 10% of the entire book is taken up with a description of the Capitol itself. It starts with a description of the grounds which ends with “the building stands on the Western portion of this plat, and commands, by the sudden declivity of the ground, a beautiful and extensive view of the city, of the surrounding heights of Georgetown, &c. and of the windings of the Potomac as far as Alexandria.”

The interior is then described in great detail, including almost 30 pages on just the sculptures and paintings in the rotunda – and this at a time when there when none of the freestanding sculptures, nor the Brumidi paintings, had been added yet. 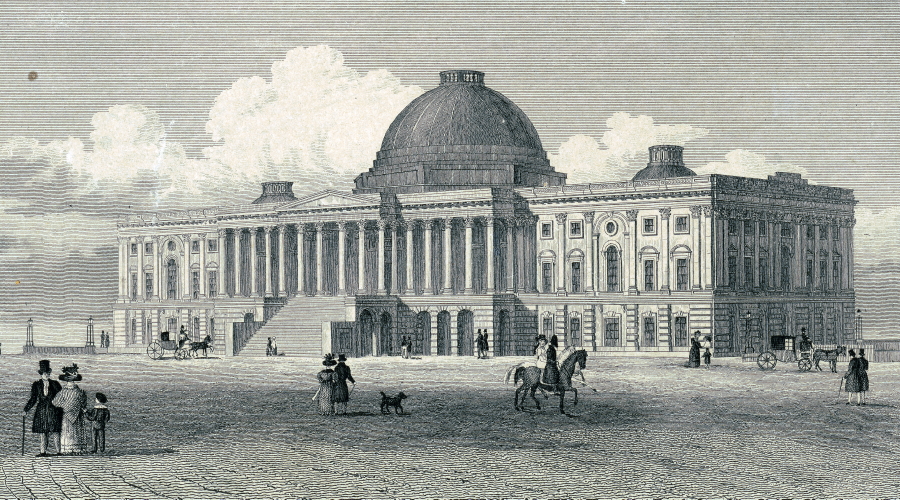 There is, of course, also a description of the Library of Congress, both the room itself and its contents:

This extensive collection of books, contains, contains, at present, about fourteen thousand volumes, in various languages. The Library is well chosen. – the classical department, in particular, comprises many rare books. Mr. Jefferson’s arrangement of them is still preserved, founded, it is presumed, on Bacon’s classification of science; and these are divided into chapters, according to the subjects to which they relate.

Toward the end of the book is a list of all those members of the First Session of the Twenty-first Congress, and where they live in Washington. Among them is a David Crockett (pictured) of Tennessee, who lived at “Mrs. Ball’s” on Pennsylvania Avenue. The Representative from Tennessee’s 9th District is of course better known as “Davy.”

Over the next week or so, I will look at further Capitol Hill sights and how they were described by Elliot in 1830.

Tags: A description of the River Potomac – its Fish and Wild Fowl; the proposed Route and Plan, Describing Objects of General Interest Or Curiosity at the Metropolis of the Union: Also, from Georgetown to Pittsburgh; and an Account of Mount Vernon. Together with Public Documents and Statistical Facts, guide to washington DC, Historical Sketches of the Ten Miles Square Forming the District of Columbia: With a Picture of Washington, holy long title batman, Jonathan Elliot, Lost Capitol Hill, of the Chesapeake and Ohio Canal, Touching the Affairs of the District., travel guide