Today’s topic isn’t so much ‘lost’ as ‘no longer easily accessible.’ The collection of cannons collected during wars past still graces the Washington Navy Yard, but access to it has been severely restricted since last year.

The first public monument in Washington – and the first at the Washington Navy Yard – was the Tripoli monument, celebrating the United States’s victory over the Barbary Pirates in the early years of the 19th Century. In 1831, this marker was moved to the Capitol grounds, leaving the Yard bereft of any memorials to victories past. To remedy this, a number of guns captured during various wars were put on display just south of the Commandant’s house. The nomination form for the Commandant’s Office offers the following description (apparently taken from another, unnamed, source) of the park, which consisted of a semi-circle of captured Naval cannons graduated from the center by size with other guns and stacks of round shot placed between this semi-circle and the office.

The exact date that they were thus arranged is not clear; however, it can first be seen on an 1842 map. In the course of the 19th Century, as tourism grew, the guns –now supplemented by Civil War-era ordnance– became a draw at the Navy Yard. An 1876 guide called The Middle States: A Handbook for Travelers, by Moses Foster Sweetser, has this to say about the collection:

The Artillery Park is beyond the Commandant’s residence; near the centre of the yard, and contains a remarkably interesting trophy-battery. Here are the powerful armaments of the Confederate iron-clads Albemarle, Atlanta, and Tennessee; an immense Whitworth gun from Fort Fisher; other heavy artillery from the Southern coast; Austrian and French guns; and a heavy cannon which was on the Confederate ram, the Merrimac.

Some time around the Second World War, the collection was dispersed, though a number of them are still on display today, including a Spanish 12-pounder that is believed to have been captured in Derna, (present-day Libya) during the First Barbary War. The cannon stands just inside the Latrobe Gate, close to where the Tripoli Monument once stood.

One gun that is not to be seen, and sadly, never will be, is one of Centreville’s Quaker Guns. During the Civil War, Confederate General Joseph Johnston (pic) was holding this small town near Manassas. When Union General George McClellan finally captured it, it became clear that all the ‘cannons’ that had been protecting Johnston and his troops were simply tree trunks painted to look like guns. There was some argument about whether they had been fake all along, or only at the end when Johnston was pulling out his troops, but everyone agreed that this did not make McClellan look good. 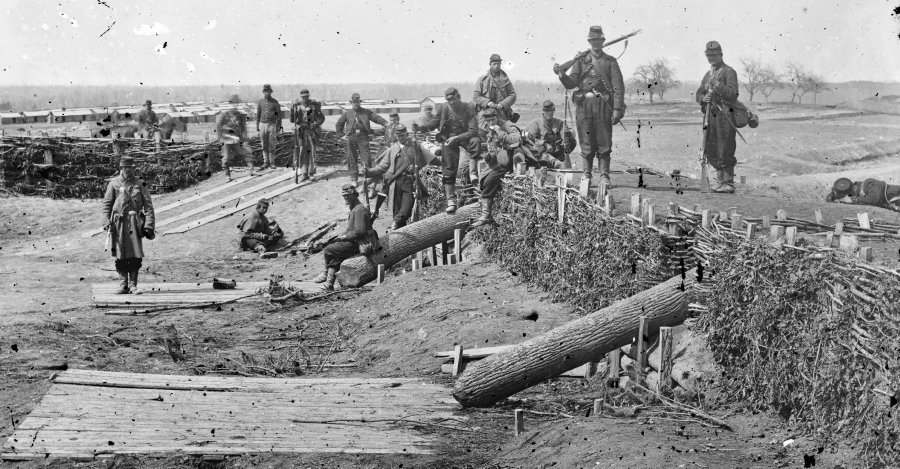 The Daily National Republican thus took this as an opportunity to make a joke at the expense of its rival, publishing a short piece on March 18, 1862:

It is suggested that the wooden guns taken at Centreville be deposited at the navy yard as trophies, with the exception of one, to be left at the Star office.

It is unlikely anyone took this suggestion seriously, but given the fame of these particular guns, and the use of similar tactics in further wars, it is probably not that bad an idea, though one assumes that these particular guns have long ago returned to the soil from whence they originally grew.