I have spent the last couple of days helping my parents move out of their current house and consolidate their two households into one. In the process, a number of interesting items have appeared, one of which is worthy of a closer look in this column. It is a book published in Germany in 1838, in which a Swiss doctor named Ludwig de Wette (pictured at left) describes a trip he took through the United States in 1837. In particular, de Wette spends a few days in Washington in March of that year – right when Martin van Buren was sworn in as President.

The story begins with de Wette taking the train from Baltimore to Washington, a trip of forty miles which took 2 and a half hours by train and cost 2 and a half “thaler” (I have no idea what currency he was using at the time, or whether he was converting it into his local currency or what.)  [Ed. Note: “Thaler” sounds an awful lot like “dollar” when pronounced out loud. In fact, that’s the etymological origin of the word.]

When he arrived in Washington, he had great difficulty in finding a place to stay, as it was just a few days before the inauguration of van Buren, and thus all the nice places to stay had been booked. Van Wette therefore had to make to with a somewhat less salubrious tavern, and found himself bunking in with a number of members of the House of Representatives. On the plus side, the lodging, including board and ‘fire’ cost only two ‘thalers.’

That evening, de Wette went to the Capitol, which was lit up, to watch Congress in action. The following morning, he had the chance to look at the city more closely, and found it to be quite regular, but also to be built on “gigantic dimensions, and will never become that, for which it was planned.”

Back at the Capitol, de Wette went to visit the House of Representatives, which he writes as being in the east wing of the Capitol – an orientation that will come as a surprise to anyone who has ever been in this building.

The main question animating the discussion on this day was the annexation of Texas, and how it had split from Mexico on the question of slavery. 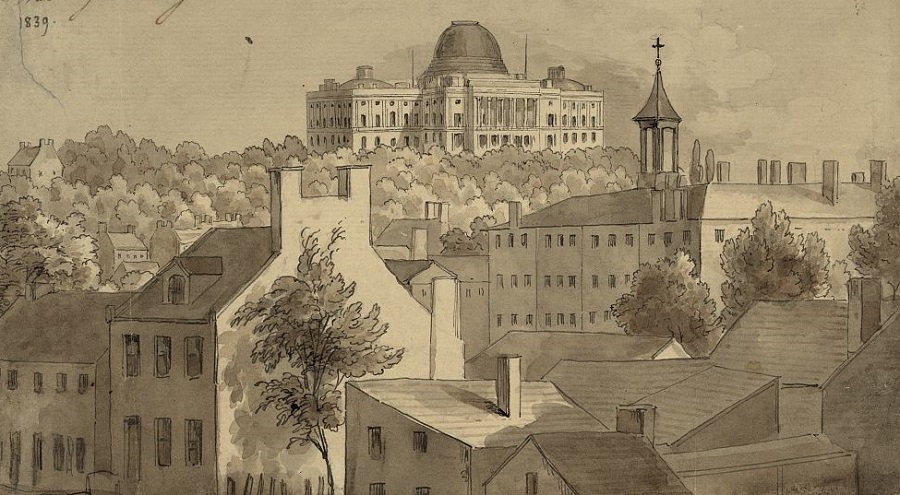 De Wette spends a fair bit of time describing John Quincy Adams, whom he says is on of the most interesting members of the House of Representatives.

It is really unique, that a man who was President of the United States, should now sit in the chair of a Representative, and he has been frequently reproached because of this, but it has not changed his mind one iota, and in spite of his age, he is one of the most busy and tireless members (he is at least seventy) It seems, that politics have become a personal need for him. It’s not ambition which drives him, as he is hardly a leader in his party. He is too independent and too stubborn to be one of those, and does not attempt to vie for their affection; he does what he thinks is right, and does not deviate from his path just because of what others want of him, and speaks without fear of the displeasure of the others in the House; Often his stubbornness gets in the way of his friends and the party to which he nominally belongs. His influence is great.

Next week: The inauguration of Martin van Buren.