Over the last weeks we looked at a number of planes who landed or took off more or less successfully at the Capitol. Today, we will branch out a little by looking at a slightly different way of flying.

Autogyros were the Next Big Thing for a number of years after being invented in the early 1920s. Instead of wings, they had a rotor that spun overhead. The rotor was not, however, the main motive power of the aircraft. Instead, an engine connected to a normal propeller actually moved the autogyro through the air, the overhead rotor, while in some cases also turned by the engine, was just there to give lift to the aircraft. The idea was that, even in the event of an engine failure, the spinning rotor would allow the craft to settle back to earth safely.

In March, 1931, the Washington Post confidently predicted that a “great step forward in aviation will be taken if the autogyro principle can be perfected and generally adopted so as to make perpendicular take-offs and landings entirely practical.”

One person who saw a future in these odd aircraft was Hiram Bingham, Senator from Connecticut. Bingham [pictured] was not interested in the possibilities for warfighting or the moving of the mail: He was more interested in making his tee time.

And so, he invited James G. Ray, vice president and chief pilot of the Autogiro Co. of America, to help out. That’s how on July 9, 1931, Ray landed his aircraft on the east front of the Capitol and, as the Post reported the following day, after he “spent half an hour posing for a battery of cameras and motion picture machines,” set off.

Senator Bingham predicted that in the near future business men will be using the autogiros  (sic) to take them out to golf clubs after business hours.

The flight to Burning Tree Golf Club took on 11 minutes, a savings of over half an hour, according to the Post’s calculations. Today, the same trip by car would take about 25 minutes under optimal conditions. 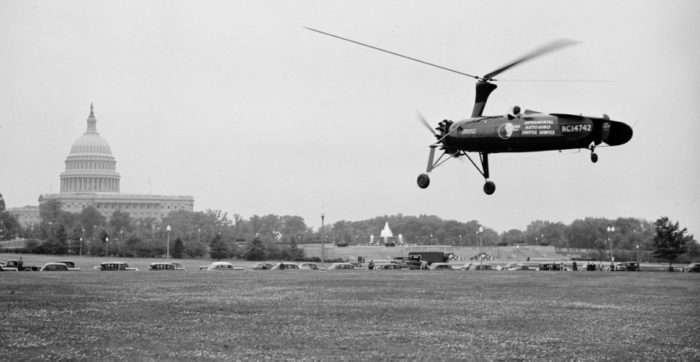 Autogyros were still the next big thing seven years later when John M. Miller flew mail around Washington, starting first with a flight from the Old Post Office at 14th and Pennsylvania to National Airport, then another flight from the Bethesda Post Office to D.C.’s main Post next to Union Station, flying past the Capitol along the way. Once again, while there was some hope that this would become a permanent feature of mail delivery, this was again a one-off demonstration as part of Air Mail Week. Autogyros were used for about ten years in various parts of the country, including Washington, but in the end, the emergence of helicopters ensured that this odd contraption would stay the purview of tinkerers and small plane enthusiasts.

There is one thing that I cannot stress enough, however: Do not try this.