Last week, we looked at an unfortunate aeronautic event near the Capitol, one that sent the would-be aviator into the hospital for a considerable time. Today, I want to look at a more successful – and much earlier – adventure.

On March 22, 1922, those people hanging around the east front of the Capitol were treated to a surprising sight: A small aircraft landing. It was by no means a great landing, as the paved area available to land on was really too short for the aircraft’s needs. Instead, the pilot found himself in need of a little help in stopping, and so rolled up to and onto the Senate steps. After going up only two or three of them, the airplane came to a dead stop and the pilot climbed out.

Lawrence Burst Sperry (pictured) was not yet 30 years old, but he was already well-known, having become the youngest plot in the US when he received his license in 1913. He then modified his father’s invention, the gyrocompass, to create the first autopilot, which he put to unorthodox use in 1916 with his student, Dorothy Rice Peirce.

Unsurprisingly, on this day in 1922, the local newspapers downplayed the issues with the landing, and praised Sperry’s skill, with the Evening Star stating that the “machine made a beautiful landing and skimmed along the smooth surface of the pavement as lightly as a bird.”

The Washington Times looked ahead in their article:

Commuting Congressmen, who will fly off to their homes in nearby States and return by air for sessions of Congress, landing on the Capitol plaza, loomed as a possibility today. When the first airplane landing on the plaza was made.

The Washington Herald was a little more skeptical, going into greater detail, including the fact that Sperry had had 100 pounds of shot on board, to help in reaching the ground more quickly. Furthermore, and certainly making it less likely that Congressmen or anyone else would make a habit of landing here, they pointed out that the “whirlpool winds got hold of the rudder, with the result that after he got on the ground they turned his tail instantly at right angles.” 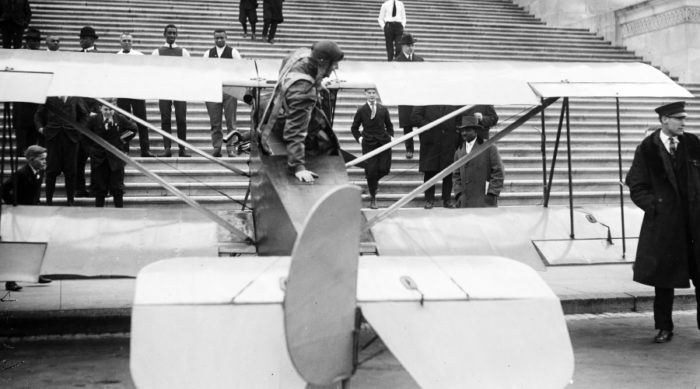 Lawrence Sperry climbs out of his airplane, which is parked on the Senate steps of the Capitol (LOC)

What the newspapers did not mention was the reason that Sperry had done this: To complain about the reluctance of the government to pay him for work done. In fact, the reason he got out of the airplane was to go to the office of the assistant secretary of the Navy. Once so unburdened, Sperry taxied to the other end of the Capitol, starting his takeoff from in front of the House wing. He managed to take off from the plaza again, and flew around the Capitol Dome a few times, and turned south on to Bolling Field.

Sadly, Sperry’s flying days would come to a halt a little less than two years later. On an attempt to fly across the English Channel on December 13, 1923, his plane crashed. The wreckage was found soon, but it would be several weeks until his body was found, and even then there was some discussion as to whether it was actually him or not. He was just a few days short of his 31st birthday when he died.