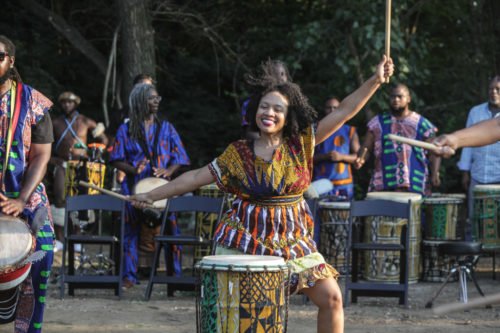 While we know we have have many more days of warm weather ahead of us, for a certain segment of our neighbors (I’m looking at you, DCPS students) this weekend is their last hurrah. Get it, kids.

How are the rest of us observing mid-August?

Tonight, take in the classic film The Wizard of Oz on the lawn at the Library of Congress, between the Supreme Court and the Jefferson Building, 10 First St., SE.  The movie is freee and begins at 8 p.m. Get there early for the 7 p.m. concert by local jazz musician Sarah Marie Hughes. You can RSVP here.

The Folger Shakespeare Library presents Bard in the Park with a screening of The Lion King at Capitol Riverfront’s Yards Park. Why the Lion King? It is essentially Hamlet with a hyena and a meerkat. The movie starts at 7 p.m. and is free.

Friday, enjoy the Capitol Hill Chamber festival’s The Able Virtuoso, a piece composed by Johann Mattheson in 1720 as well as other 18th century compositions performed by Marlisa del CidWoods- baroque violin, Billy Sims- therbo and Jeffrey Cohan- baroque flute.  The concert is at 7:30 p.m. at St. Mark’s Episcopal Church and tickets are a pay-as-you-wish donation, with a suggested level of $20-$25. Kids under 18 are free. You can pay in advance here.

Latin music band La Unica performs at the Free Friday concert at Capitol Riverfront at Yards Park. Things kick off at 7 p.m. and end at about 9 p.m.

Saturday, celebrate the Rock and Roll Hotel’s 12th anniversary. The El Paso-based band Sparta will take the stage at 9 p.m. and the doors will open at 8 p.m. Tickets are $17 in advance and $20 at the door.

Sunday join Step Afrika! at the Wharf for a free performance. This internationally renowned company calls the Hill home and will undoubtedly perform a fun and high energy show.  It might almost take everyone’s mind off the fact that school will be starting the next day.