August 24, 2018 marks the 204th anniversary of what may be the darkest day in the history of Washington, D.C.: The burning of the city by the British during the War of 1812. Today, it is little more than an excuse to have a party. Back then, it temporarily brought into question the whole existence of this still brand-new city and its role as a federal capital.

What makes the day particularly worth remembering is its very irrelevance. On a tour of Washington given recently to a busload of British tourists, not a one knew of this event, or, frankly, the entire War of 1812, which to them was a mere sideshow of a sideshow of the Napoleonic Wars with France.

The runup to the attack on Washington was pretty straightforward: In response to the British Navy impressing US sailors, the United States had invaded Canada and burned down York (what is today Toronto) In retaliation, the British sailed up the Patuxent River, then set off overland for Washington. At the border of the District of Columbia, the American militia and Commander Joshua Barney and his sailors and Marines attempted to stop the invasion.

It did not go well. The Americans held briefly, then ran “like sheep chased by dogs,” as Charles Ball, one of Barney’s men, wrote many years later. With Washington now undefended, the British marched towards the Capitol by way of what is today Bladensburg Road and Maryland Avenue. While some of the men stopped at Gibson’s Spring, others moved on to the Capitol and the White House to burn them.

The Capitol was torched by turning all wood used throughout it into a great pile of kindling, which was then set ablaze. Particular damage was done to the Library of Congress, filled as it was by flammable books and heavy timbers. 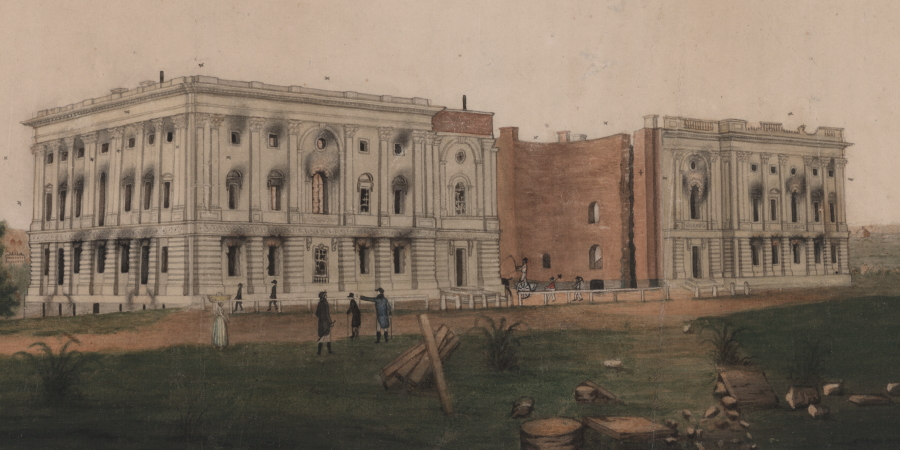 The Capitol shortly after the burning of Washington (LOC)

While this fire was raging, other soldiers were sent to burn other federal buildings in the city – chiefly of course the White House; however, the State and War offices were not spared either. However, when it came to burning down the Patent Office, the head thereof, William Thornton successfully argued that, while the building was public, the contents belonged to citizens of the United States, and thus should not be burned. Admiral George Cockburn (pictured) agreed, and the Patent Office was spared, in contrast to the offices of the Daily National Intelligencer, which Cockburn considered an arm of the government, mainly because they had spilled a fair bit of ink insulting him personally.

While the British did a fair bit of damage to the city, the Americans also did their part, burning the Navy Yard to keep the material there from falling into British hands.

In the end, the British left the city quite precipitously. Not because the Americans had rallied and were threatening to retake the city, but because a heavy windstorm swept through the city, and the invaders were worried about the damage their ships might have taken. The Americans crept back and began the process of rebuilding their city, first having to overcome attempts to move the federal capital further inland. In the end, a temporary capitol built by Washington’s city fathers convinced Congress that this would remain the capital of the country.

Tags: burning of washington, war of 1812