George Washington may have given his name to our city, but he did not live to see the Federal Government move here. This did not mean that he was never in the city that he always preferred to call “The Federal City.” Indeed, he was here numerous times, often on his way from Mount Vernon to Philadelphia while President, but even thereafter, he would come a few times a year to visit friends – and to see how the houses he was having built were coming along. Today, we will have a look at these two houses and how they were built.

Washington was convinced to buy a number of lots in the District of Columbia and build on them by city fathers who were convinced that having the ex-President invest in the city would drive others to put up their money, as well. DC was not doing well at the time, many people felt that any money sunk into the new capital city was money lost, so anything that would show people that this new city had a future was useful.

Washington thus bought a number of parcels of land, including a lot on Square 634, due north of the Capitol on the west side of North Capitol Street. On this lot, he requested that William Thornton, first architect of the Capitol and a friend, would build two houses based on some that the ex-President knew in Philadelphia.

On December 20, 1798, one day after having dined with William Thornton, Washington put his money where his mouth was, and sent a check to Thornton to enable him to begin building. In less than a year, the buildings were completed, and so on November 9, 1799, Washington once again stopped by the Federal City to see his new buildings. He saw two wide houses, of the federal style with flat fronts, three stories high plus one floor in the attic. He is said to have been quite pleased with their construction, and hoped to use them for many years to come. 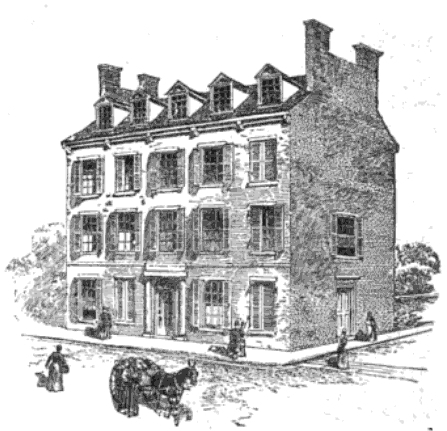 One of George Washington's houses as originally built (Google Books)

Unfortunately, George Washington died a little over a month later, on December 14, 1799, having seen the houses exactly once.

During the burning of DC in 1814, Washington’s houses were some of the only private residences to be burned, probably because congressional clerks had stored government documents in them, though possibly they simply burned when fire jumped from the Capitol to them. The ruins were sold in 1817, and eventually rebuilt.

In the ensuing years, the houses were changed and expanded numerous times. As North Capitol Street was regraded and lowered, the houses had two floors added underneath, to bring them down to the level of the street. The attic was changed, as well, it was built out to make expand it into a full floor.

It was later used first as a boarding house, then later as a hotel – the Kenmore – under which name it gained notoriety for being the scene of a most mysterious murder. A census clerk named James Ayres was shot there by a woman not his wife – and in fact the mother of two teenage boys. Her story, that Ayres had attempted to rape her and she had shot him with his own weapon, was plausible enough for the jury, and she was acquitted. The Kenmore hotel closed shortly thereafter.

In 1913, the US government bought what was now the Burton hotel, and razed it in order to make upper Senate park. All that exists of George Washington’s houses is a plaque that was set there on the occasion of the 200th anniversary of General Washington’s birth in 1932.