The 204th anniversary of the Burning of Washington is almost upon us, and so it seems appropriate to look at one of the episodes of this tragic time that took place on Capitol Hill. No, not the burning of the Capitol by the British, but the burning of the Navy Yard… by the Americans.

Burning the Navy Yard was not something done lightly, in haste, or without cause. Rather, it was a decision made by the highest reaches of the federal government. Secretary of the Navy William Jones surveyed the Yard and later wrote that, were the operation to fall into the hands of the enemy, it would “greatly extend the field of his plunder and devastation.” During his visits, Jones also suggested to Thomas Tingey, the commandant of the yard, to move what he could – especially gunpowder – to safety. Tingey attempted to follow this order, but the fact that most of his men were in the militia hampered him.

On the morning of August 24, with the British now closing in on Bladensburg, a short meeting was held with President Madison, the relevant cabinet secretaries, and the military commanders. During this meeting, which was mainly to plan the defense of the city, Jones was given permission to burn the Navy Yard and its contents as well.

Jones passed on this order to Tingey. It must have been a tough order for Jones to give, as Tingey had been largely responsible for the building of the yard over the previous 14 years. Nonetheless, Tingey understood the importance of this order, and promised to carry it out. However, he also decided to wait until the last possible moment to do so, in case by some miracle the militia was able to drive back the invaders. He spent the intervening time continuing to load as many boats as he could with cargo, in order to ship it across the river to Alexandria, as well as to priming the facility for quick ignition.

Even after news of the outcome of the Battle of Bladensburg reached Tingey, he did not immediately set his work aflame. Instead, he allowed his clerk, Mordecai Booth, to scout out the situation around the Capitol. Only after Booth returned with the news that he had only barely escaped the British, who were firmly in control of the area, did Tingey give the fateful order.

It was 8:20 PM, and the British were about a half mile from the Navy Yard when Tingey and his men lit the powder trains that they had spread across the compound. Tingey spared only one ship, the Lynx, and with the fire roaring around him, he set off in a small convoy of three ships for Alexandria and safety. 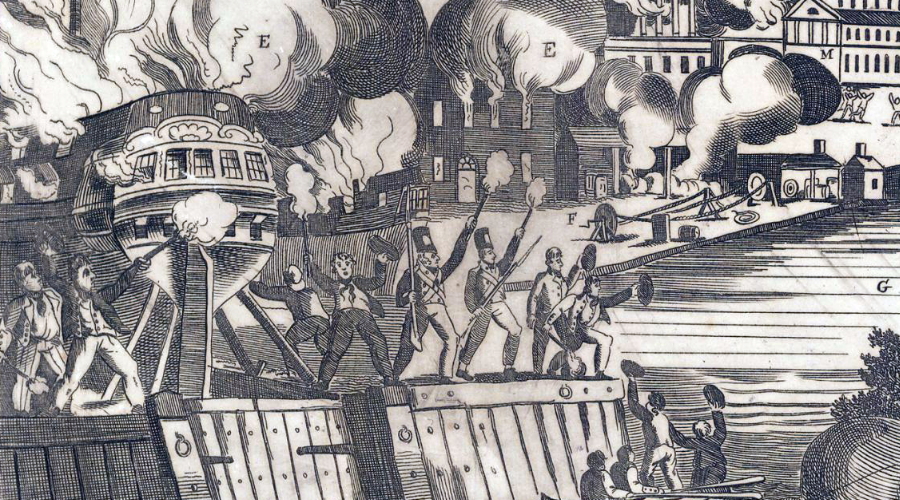 Detail of a picture of the events of August 24, 1814, as published in Britain a few years later. (LOC)

Tingey would return the following morning to find that the destruction was as thorough as he had hoped. All that was left was the Lynx – and his home, which was already the target of locals who saw this moment as an opportunity to enrich themselves. Tingey saved what he could of his household goods, then returned to Alexandria after finding out that the British were nearby and quite possibly looking for him.

That evening, the British army left D.C. and returned to their ships. The following morning, Tingey took over the Yard again and began the long job of rebuilding it.