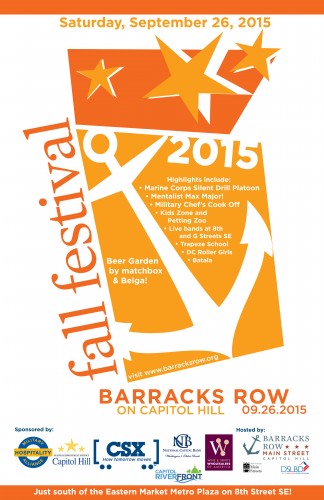 D.C’s street festivals all have their own unique feel, which is what makes them so great. One of my favorite things about Barracks Row’s Fall Festival is that it feels like such a neighborhood festival, with something for everyone who lives on the Hill.

You can get a taste (literally) of what the Marines’ chefs and other armed forces’ chefs can cook up during a culinary challenge, try out workout moves with local gyms, meet local politicians, taste bites from area restaurants, and more. For the kids, there is usually a petting zoo and lots of crafts and games.

So mark your calendar for September 26th and stroll down 8th street on what will hopefully be a beautiful fall day in the neighborhood.

This year the 15th annual Barracks Row Fall Festival will be held Saturday, September 26 from 11AM to 5PM. Our location is 8th St, SE, between E St, SE, and I St, SE, near the Eastern Market Metro. Closed to vehicular traffic the bustling historic corridor is transformed into what first appears to be a quaint small town fair … until fair goers catch onto the many urban curiosities in their midst!

There are continuous performances of Trapeze School DC as aerialists fly in the treetops above historic brownstones. The Georgetown Chimes, the well known a capella group will make several stage appearances. This year the DC Area Drone User Group will showcase do-it-yourself and consumer drone technology while, nearby, the Potomac Fiber Arts Guild demonstrate their skills at looms of all sizes in a triple tent on the midway.

All day long a black box cook off is held right out on 8th Street as chefs from our armed forces – including the White House – compete in front of the crowd (beginning at 7:30AM) for the trophy of Top Chef in the US Military.  This year the mind reading, escape artist, Max Major, Mentalist & Illusionist will perform on stage at 1:00PM.

A group of Barracks Row restaurants including Belga and matchbox will be hosting a Beer-B-Cue in the parking lot across the street from matchbox while an accordion player and magicians stroll the many sidewalk cafes along the row. At 2:00PM the all-female Afro-Brazilian band will rock the intersection of 8th and G Street. At 3PM all is quiet as the Marine Corps Silent Drill Platoon performs before a hushed crowd then everyone breaks into cheers as the last synchronized sequence is flawlessly completed. Afterwards, meet your heroes at the President’s Own booth for photo ops.

Fashion trucks join food trucks, artists, craftsmen, restaurants, schools, and local Capitol Hill organizations to create the midway. Eight river-oriented organizations will be grouped together under the banner We Love the Anacostia River. Meanwhile, at the corner of 8th and E Street, piglets, llamas, and lambs are waiting for you at the petting zoo all day long to meet kids and their parents.

The Kennedy Center and the Washington Nationals come together in one person: Glenn Donnellen. The Kennedy Center violinist has put strings on his favorite baseball bat transforming it into a violin- his interactive performance (yes, you, too can play the bat) begins at 3:30PM – just in time for fair goers with Nationals tickets to make the ten minute walk west on M Street to the second-to-last home game of the season. Finally at 4:30PM the judges of the Military Chef’s Cook Off take the stage to announce this year’s Top Chef.

An updated schedule of acts and festival events, including the times for trainer-led walks of Chesty the Marine Corps bulldog mascot will be posted on the Barracks Row website by September 20.