Origami Owls and #MeToo: A Symbolic Display at St. Mark’s 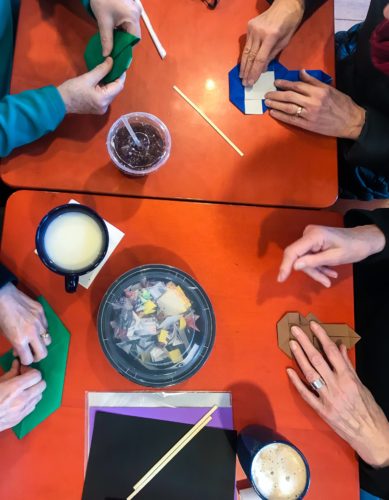 Want to start 2019 with something inspiring? Here’s a story for you.

Capitol Hill resident and St. Mark’s Episcopal Church member Elin Whitney-Smith started asking a group of friends and fellow church members about their experiences with sexual harassment and/or discrimination, and she started collecting the number of instances of sexual harassment mentioned by this circle of people in an informal way. Despite the strides we’ve made as a society with the #MeToo movement, many of us are still uncomfortable sharing our personal experiences regarding these situations. Elin was motivated by the Kavanaugh hearings and by Dr. Christine Blasey Ford’s testimony and people’s reactions to Dr. Ford’s story. What interested Elin most of all was the (erroneous) perception that sexual harassment is not as pervasive in our communities as it has been and continues to be.

The replies collected through the month of October by Elin and her friends –the Owl Parliament– were insightful: “The younger women, for the most part, had fewer experiences. We also have 4 men with 1 incident each… 12 people reported more than 50 [incidents]… 17 people reported between 10 and 49, and 14 between 1 and 9. And 3 people reported that they had never had such an experience”

Elin, who is an artist, wanted to represent each one of the 1353 incidents she and her friends collected in a way that would have visual impact– much in the way the thousand origami cranes are a symbol of wish fulfillment. This is how she found herself folding origami owls for every instance of sexual harassment. She started mostly on her own and received some help from the church community, and got a coffee group going at Port City Java as well. The group, which has gathered after water aerobics classes at the Rumsey pool since November, brought members of the community not associated with church into the fold (pun somewhat intended), and added a new dimension to the stories. The coffee ladies’ enthusiasm for the idea and their stories have made it clear to Elin that harassment is as pervasive as she suspected, and that whole communities need to be involved. Although they stopped collecting data in November, whenever a new person comes to fold or takes interest in the project, new stories come to the foreground. Just knowing that a project is underway brings people some comfort and allows them to say, “yes, this happened to me.” For those who haven’t been victims, it’s a chance to hear what others have been through, and to develop empathy.

Why did she pick an owl? Elin says, “Minerva, the goddess of wisdom is accompanied by an owl, and they… represent wisdom. Owls have eyes in the front of their faces like we do, so they see in three dimensions and are able to turn their heads completely around so they can see behind themselves. They are silent flyers so you may not know they are there. And finally, owls rid the world of vermin.”

Working tirelessly for the past couple of months, Elin is very close to her goal. The next challenge? Installing all one thousand plus owls in the sanctuary at St. Mark’s, just in time for Epiphany Sunday. The date is symbolic as well: The season of Epiphany brings the revelation that the baby born on Christmas is not an ordinary child– the celebration focuses on the three Wise Men paying the child Jesus a king’s tribute. “[Epiphany] is when the light returns, and I’m hoping that this will shed light on how pervasive sexual harassment is.” The installation will be up and can be viewed by the public through Tuesday, February 5.

WHAT: Owl installation to bring a focus on sexual harassment stories

WHY: To view a community-created representation of a systemic problem, and to raise awareness that even in the age of #MeToo, we still have problems coming forward. And yes: #MeToo.