Over the last couple of weeks, I have looked at the sections of an 1830 guidebook that covered Capitol Hill. In spite of its length, there is really only one more short excerpt and a few snippets to look at: those pertaining to Congressional Cemetery and the churches of Capitol Hill.

The section on the cemetery refers to it as the “National Burial Ground” and the description begins thusly:

In this “City of Silence” are deposited the remains of such members of Congress, as die at the seat of Government. It is also the burial place of the citizens. About a mile south east of the Capitol, in a lonely, but interesting site, sloping from the road towards the margin of the Eastern Branch, the cemetery is laid out. It is enclosed with a wall, and kept in good order.

Elliott then continues on with a description of a number of the important people buried there, starting with Vice Presidents George Clinton (who was moved to Kingston, New York, in 1908) and Elbridge Gerry. Both of their monuments are described in detail, with Clinton’s being the “most attractive and conspicious monument,” while Gerry’s is a “pyramid supporting a vase.” 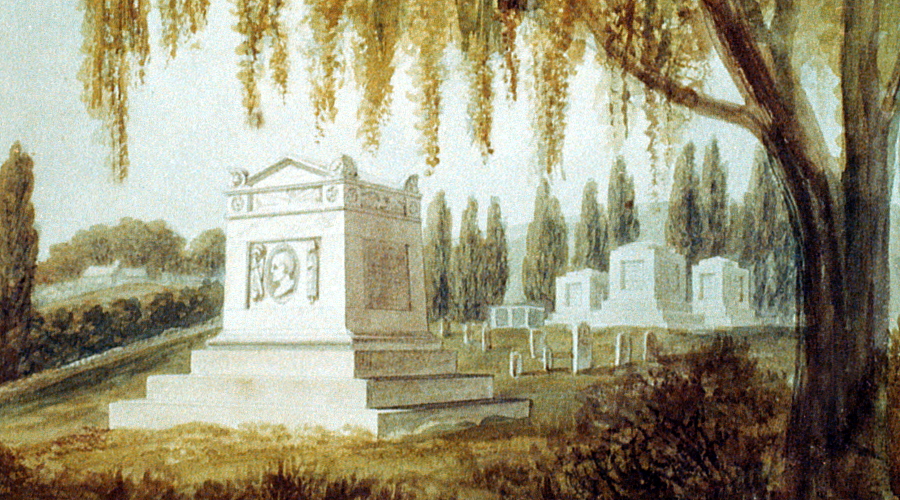 Original plan for George Clinton’s grave. Detail of architectural drawing by Benjamin Latrobe. Other than the relief of Clinton, the headstone as built was entirely different. In the background are the cenotaphs marking the graves of deceased Congressmembers. (LOC)

Elliott then lists the 18 Congressmembers who had died in D.C. up until that point and had been buried there under “freestone monuments, painted white, short, square and plain pillars, with a cove top, based on a pedestal.” The three who died before the opening of Congressional and buried in Rock Creek Cemetery are mentioned, but not listed.

Finally, four “miscellaneous public characters” are listed: Major General Jacob Brown, a hero of the War of 1812 and Commanding General of the US Army when he died in 1828; Pushmataha (pictured) the Choctaw chief who died in D.C. while here to lobby Andrew Jackson; Friedrich von Greuhm, the first ambassador from Prussia to the United States – and the first German to be accredited to the United States; Captain Hugh George Campbell, who had served in both the Quasi-War and the War of 1812. Other than the Choctaw, none of these remain of interest to those touring the cemetery.

The only other information on Capitol Hill given in Elliott’s book is a few words on the churches thereof. There are brief mentions of St. Peter’s, Christ Church, Navy Yard Baptist and Ebenezer Methodist. Of St. Peters, all that is set down is that it “is 85 feet long and 60 broad, congregation 2000.” Christ Church is given a little more space, including the fact that it “was honoured with the regular attendance of those distinguished statesmen, Jefferson and Madison.” Of the Navy Yard Baptist, all that is written are the names of its four regular pastors and that it “is composed of upwards of a hundred communicants.” As to Ebenezer Methodist, Elliott seems mainly intrigued by the fact that the Methodist Associate Church has split off from it, and he wonders how this will play out.