Marie and Rosetta at Mosaic Sing And Swing

Mosaic Theater kicked off its newest season by proving that, just when you think they couldn’t possibly be the most inclusive theater company around, they can always do better. What topped last year’s beautiful, bold The Devil’s Music? A dialogue/tetralogue with Rosetta Tharpe and Marie Knight, with the live musicians that help tell the story right on stage and in full view, that’s what! 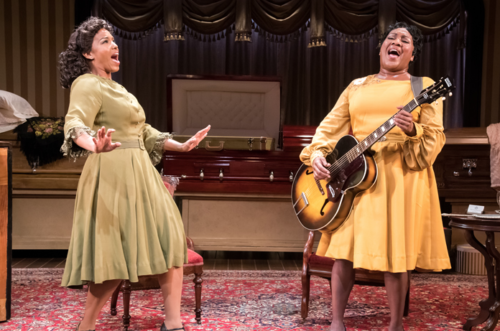 Marie and Rosetta, by George Brant, is not just a vibrant play but a necessary history lesson in the genius of Sister Rosetta Tharpe. Not a spoiler, just fact: It seems absolutely ludicrous and unbelievable that a woman who influenced so many of rock’s pioneers and almost single-handedly built the bluesy early rock-and-roll sound herself would die in relative obscurity and be buried in an unmarked grave in Philadelphia (a fact that has since been corrected). That she is now not just remembered but deservedly appreciated took scholarship and research. This is especially welcome in a world where the accomplishments of people of color tend to be sometimes overlooked.

Marie and Rosetta takes an imagined snapshot and develops it into a complex portrait of both women. Rosetta Tharpe is a bona fide star at the top of her game. She has just managed to woo budding talent Marie Knight. Knight, who was singing with the Sunset Four when Tharpe spotted her, was also in demand from the foremost gospel singer of the era, Mahalia Jackson. (The same Mahalia Jackson who sang Martin Luther King, Jr., a lullaby in Selma, for those of us who remember our history with the help of movies.) The two women get to know one another and, by extension, reveal their souls to us. Every element in the play is neatly used for dramatic effect, starting with the beautiful set, designed by Andrew Cohen.

The show runs 100 minutes with no intermission. While at first you may be alarmed about this announcement, rest easy: You will be humming, clapping, laughing and crying so much that the end will come sooner than you think. The show’s crescendo builds steadily, thanks to director Sandra L. Holloway’s thoughtful pacing: We are introduced to both women, and quickly, to their ability to play the piano. (Marie is better, just so you know.) My hat is off to gospel pianist Ronnette F. Harrison for having the ability to stay still and poised while Marie (Ayanna Reed) and Rosetta (Roz White) cavort, mime and flirt right on top of her and her piano. Ms. Harrison’s playing is so expressive and fluid that there is almost no way she really is sitting there playing, when all you can see is her serene face. There was only one point, possibly after “Tall Skinny Papa” where there was the faintest knitting of her brow visible. It was a quick moment, however.

The guitar, played with so much relish by Barbara Roy Gaskins, is introduced with a bigger flourish about a half-hour into the show. Ms. Gaskins and Ms. White have a particularly lovely rapport: It’s as though Ms. Gaskins were really a personification of a guitar– an imaginary best friend with whom to get into the best kind of mischief. Every performance, directed by e’Marcus Harper-Short, is one banger after the other, as the kids say.

Right before the heart-rending dénouement – which will at least make your heart ache, if not coax some very bitter tears out of you– the abundance of riches might almost get to be too much. Don’t focus on that: Few shows deliver the emotional highs and lows and the necessary gut-punches these days without a little mussed makeup.

WHAT: Marie and Rosetta, the season opener at Mosaic Theater

WHERE: Mosaic Theater is at the Atlas Performing Arts Center, 1333 H Street NE

WHY: Because for the price of one ticket you get a history lesson and a concert. It doesn’t get much better than that.