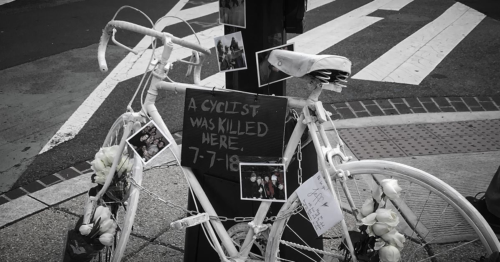 Photo from the Jeff Long vigil. Courtesy of WABA, via screen shot.

Pedestrian and bike casualties have increased in the District over the past two years, according to data in a recent Washington Post article. Incidentally, Vision Zero also started campaigning for safer streets two years ago. It appears that Vision Zero is just not a very successful program, at least in the biker and pedestrian deaths metric.

The Washington Area Bike Association is organizing a rally tomorrow, July 19, at the steps of the Wilson Building, 1350 Pennsylvania Avenue NW, in order to demand that Vision Zero and the District Department of Transportation take road safety seriously. Neighbor Dave Salovesh, a WABA member since 2000, states it succinctly: “Everybody who uses DC streets should be interested in making them safer. Pedestrians should attend, and even drivers should be demanding that the city do more to increase their safety. What I hope to see [as a result of this rally] is pressure on DDOT and the mayor to align their actions with the words they’ve put forth.”

Two cyclists were struck in the District, less than two miles away from one another, within two weeks of one another. One, 19-year old Malik Habib, got his tire stuck in the DC Streetcar rail and was struck by a charter bus. The other, 36-year old Jeff Long, was hit by a driver making a right turn. Long was within his protected bike lane and therefore should have been safe. And yet, hundreds of mourner activists remembered both deaths recently. However, the Washington Area Bike Association is not done with taking to public spaces to demand more and better protections for cyclists and anyone who gets around town not in a car.

Even though Vision Zero was rolled out two years ago with much fanfare and bus billboards, it’s easy to find examples where priority is given to construction or to vehicles, or where vehicles are allowed to block bike lanes and sidewalks– forcing pedestrians and cyclists into potential life-threatening situations. (See embedded tweets below)

Motorists become increasingly frustrated and agitated by construction and other traffic obstacles, and this reflects on their more aggressive driving, which in turn can put people who are not protected by a ton of steel and plastic at an alarming disadvantage.

If, as a pedestrian or as a cyclist, you’ve ever felt unsafe getting around your neighborhood, you should consider attending this rally. There is a Facebook event to help you plan and keep you updated, which you can find here.

WHAT: WABA’s “Enough is Enough” Rally for Streets That Don’t Kill People

WHERE: Gather in front of the John A. Wilson building, 1350 Pennsylvania Avenue NW

WHY: Because if you are committed to getting around the city via bike or foot, the District needs to know that this uptick in deaths is unacceptable. Streets are to be shared between different modes of transportation: They are not the sole domain of motorists.

HEAT MAP! Hey #bikeDC: you now have your own page on https://t.co/Xr1ub3SxTo . And best of all, there’s an image of your bike lane obstructions heat mapped! pic.twitter.com/z7Jn3W3mIF

Everything you need to know about @DCVisionZero: @DCPoliceDept parked in #bikedc lane instead of adjacent loading zone; warning drivers at school drop off; recommending they park in bike lane instead. pic.twitter.com/LsRkPrxb6v

Today’s “Brazen driver” award goes to Maryland tag 5CB7455, who thought it was a good idea to almost run over pedestrians! Much red light. Such @DCVisionZero! Wow. @DCPoliceDept@311DCgov@DDOTDCpic.twitter.com/QgcWzTzSD9

PS: The graph in this post by Georgetown Metropolitan should really bring the point home: Cars are exponentially more dangerous than bikes.