A while back, I wrote about the Statue of Freedom that tops the Capitol building. I did not, however, delve into a story that I had heard about it, nor did I do so when I wrote my book on urban legends. To be honest, I was not sure that there was any truth to it, nor could I find any place in print that stated it. So, today I will look briefly at the supposed statue height limit – and the statue that shows it does not exist.

There are over 100 statues of famous people all across D.C., from Archer Alexander in Lincoln Park to John Witherspoon at Connecticut Avenue and N Street NW. Until recently, they all shared one feature: They were shorter than the Statue of Freedom that tops the Capitol.

Now, whether this was simple happenstance or a concerted effort to impose a height limit on D.C. Statuary is unclear. What is true is that you will occasionally get a tour guide – including some in the Capitol itself – who claim that there is an agreement that no statue exceed it in height. What is certain is that no law exists that would keep a statue under that height. On the other hand, it took almost 150 years from the installing of the Freedom Statue until a larger one was built.

The most famous statue to be erected in D.C. since then is the Lincoln statue that graces the Lincoln Memorial. Sculpted by Daniel Chester French and carved by the Piccirilli Brothers, it shows Lincoln seated, looking out over the Mall and towards the statue of Ulysses S. Grant just below the Capitol. The statue is almost 19-1/2 feet tall; were Lincoln standing, he would rise some 28 feet. Thus, tour guides will tell you that this is the reason that French sculpted the president sitting down: He wanted a large statue, but wanted to stay below the 19-1/2 foot mark.

French was never quoted one way of the other as to why he had chosen to have Lincoln seated. An equestrian statue was out of the question, but a standing statue would have been possible. Apparently, the size was determined in consultation with Henry Bacon, who designed the rest of the memorial, though apparently their discussion was only as to what would fit in the space, not how it related to other statuary in the city. 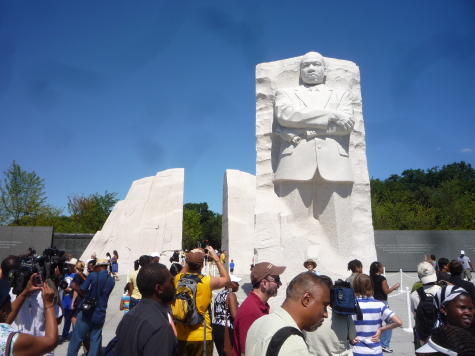 Either way, Lincoln remained shorter than the Freedom Statue, as did all other statues in the city until two years ago, when the Martin Luther King Jr. statue dramatically raised the bar. At 30 feet tall, it towers over all other statuary, especially as it is one of the few statues where you can get right up to the base, giving you a real feel for its height. While many aspects of the project were mired in controversy, no discussion of the height appears to have been made. The Washington Post did publish an article showing that it was much bigger than both Lincoln and Freedom – and the Jefferson is about six inches shorter; they did not indicate that there was any controversy about this.

In short (ha!) this seems to be the end of the statue height limit story. If it were not for the many other stories definitely laid to rest that continue to circulate, zombie-like, that would be that. Instead, watch for this story to be told for the foreseeable future.

Robert will be talking about his new book Urban Legends and Historic Lore of Washington, D.C. on November 19, 7:30 PM at the Washingtoniana Collection at the Martin Luther King jr Library.

One response to “Lost Capitol Hill: The Statue Height Limit”