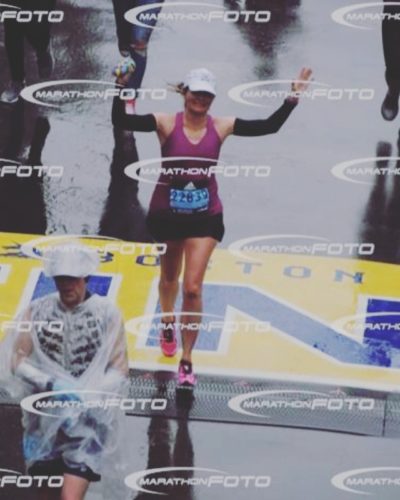 Clad in a shower cap, surgical gloves, plastic poncho, and makeshift galoshes fashioned from garbage bags, I looked more like a deranged surgeon in a low-budget horror flick than a runner ready to race the Boston Marathon. As I stood shivering ankle-deep in mud about to go head-to-head with a 20 mph headwind I couldn’t stop laughing at the absurdity of it all. I had no control over anything except my attitude and decided to enjoy every sloppy step and go with the flow downstream to Boston because I almost didn’t make it to the start.

If you’ve been following my journey from Capitol Hill to Heartbreak Hill, you may remember that the race fell on the same weekend as my daughter’s Confirmation. I had to fly up to Boston on Friday before the race to pick up my packet, fly back to attend the Confirmation, and back up on Sunday for the race on Monday. The marathon was turning into my own episode of the Amazing Race!

On Sunday morning, while attempting to check in for my flight to Boston the phrase, “Check-in is unavailable at this time due to a weather advisory“ flashed onscreen. I obsessively refreshed every few minutes only to be mocked. Apparently winter storm Xanto buried the Midwest and northern states under a few feet of snow cancelling flights and grounding planes around the country– quite possibly grounding me, too! There was a small piece of me that would have been relieved if the flight were cancelled as the weather forecast for race day kept deteriorating. I imagined using the credit from my unused flight to go on a desert spa vacation and having a good excuse to skip my now-dreaded marathon.

By Sunday afternoon, both daughter and flight were confirmed! Dreams of sipping margaritas poolside gave way to storm-chasing in New England. “Watch out for flying branches?” warned my parents as they dropped me off at the airport: One more pre-race anxiety on my list. Upon arrival in Boston, our flight sat on the tarmac for over one hour. By the time I got to the hotel, I felt as if I’d run a marathon already.

Running a marathon is as much mental as it is physical. The goal was to finish and not to wind up in a medical tent, so I planned to run conservatively. I visualized each mile ticking away like the minutes on an alarm clock radio from the 70s. The rain varied in intensity: At times it felt like I was being doused with a fire hose! The crowd of runners erupted into cheers as if their favorite team had won the Super Bowl every few minutes when frozen deluge after frozen deluge assaulted us. We were bound together in our collective misery. It was so miserable it was good. For someone whose mind is typically full of random thoughts, I felt present, focused, and full of joy.

At mile eighteen, a spectator was giving out Swedish Fish. I love Swedish fish! I devoured them and a switch went on: It was time to really race this thing! In my mind, I became a superhero flying toward the finish. I believed I was running the fastest I had ever run. The fantasy did not match reality: The miles between eighteen and twenty were my slowest. I discovered this upon returning  home and downloading my data. I later read that Shalane Flanagan, the winner of the NYC Marathon, thought she was winning as well, though she came in 7th place. I like to think I had a little bit of Shalane in me.

As I approached mile twenty-five I peeled off my surgical gloves, rain poncho, throwaway shirt, and shower cap. I did this to have some ‘good’ photos to commemorate the day, but now realize its symbolic significance. Over the past year I’ve felt unmoored. Milestones were happening fast: my daughter’s Confirmation and her approaching transition to high school. I wondered what my new role in her life would be. That uncertainty led me to this point. In 2011 when I ran Boston for the first time, I was at my peak fitness; my daughter was seven and needed me in a way then that she no longer does now. I wanted a piece of that time back.

When I crossed the finish line, it became clear I was exactly where I was supposed to be. All the worry and clutter were washed from my mind and I had pushed through every obstacle much like I pushed through the wind and freezing rain. I was older and slower, but wiser and more comfortable with the uncertainty. I had weathered the storm.

It was a perfect day.