For many, the Boston Marathon is more than a race: it’s a 26.2-mile pilgrimage and 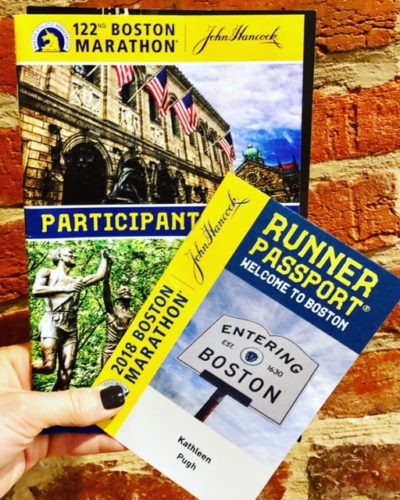 the Olympics of recreational runners. For me, it was a rare opportunity to share the field with some of the greatest runners in modern history, as well as a way to ward off the winter blahs by having a big goal to focus on. When I first wrote about my road from Capitol Hill to Heartbreak Hill, I shared how I squeaked in with the exact qualifying time and since the race day sign up was on my birthday, Boston was meant to be.

Only it almost wasn’t.

“I feel like we have something else going on April 15,” I said to my husband as I entered our daughter’s Confirmation date into the family calendar.

“Other than tax day, I can’t think of anything,” he replied.

I couldn’t shake the feeling that something else important was happening around April 15. Later that week, I received a packet from the Boston Athletic Association confirming my place in the 122nd Boston Marathon on Patriots’ Day, April 16– the day after our daughter’s Confirmation! Fortunately, the marathon is on a Monday and Boston is only an hourlong plane ride so while I would miss the pre-race festivities I’d still get to run and attend the Confirmation, right?

I asked my friend who was also running Boston to see if she’d be willing to pick up my race packet since the expo would be closed by the time I got there.

“I would if I could, but they don’t allow anyone else to pick up the packet,” she said.

“Are you kidding me? I pick up packets for friends all the time and it’s never a problem,” I whined.

“Boston is really strict because they have a problem with cheaters.”

I wrote a heartfelt letter to the Boston Athletic Association letting them know it was my only daughter’s Confirmation and my family was traveling to the event. Since Boston is still a predominately Catholic city, I convinced myself they’d make an exception.

Hopeful that things would work out, I carried on with my training. A month later, I received a reply informing me that no exception would be made and further advising that I should make alternate arrangements.

“Don’t’ they have to give me a religious exemption?” I complained to my husband.

“This isn’t a matter of religious accommodation, but rather poor calendar management,” he pointed out.

He always reminds me to put everything into the family calendar so we can avoid overbooking ourselves. I hate it when he’s right!

When I told a friend about the response from Boston, she mentioned a runners’ Mass held the day before the marathon and half-jokingly suggested I inquire if my daughter could be confirmed there. What a wonderful idea I thought. We’ll bring the whole family to Boston. How special would that be? A Boston Marathon Confirmation! Problem solved.

When I presented the idea to my daughter she responded with a rather empathic “No way!” She also pointed out that her confirmation was not about me and she was right. It was wrong for me to suggest combining the two. I was treating her like a kid whose birthday is on Christmas and only gets one gift.

I was frustrated. What seemed so perfect and meant to be just a few months ago had turned into a fiasco. Why couldn’t I just let it go, realize the marathon fee was a sunk cost, and find another race to run? Boston had become the forbidden fruit. The more someone tells you that you can’t have it the more you want it.

The race expo is open from Friday through Sunday so theoretically I could go to Boston on Friday, pick up my packet and come back the same day. Then, fly back on Sunday evening for the race on Monday! When I checked on flights, they cost as much as a weekend package deal to Vegas: at this point, a better use of my money. I finally found a reasonably-priced flight on a no-frills airline where the two round trip flights cost less than one on a bigger carrier. Although I knew it was crazy, I clicked purchase for the two flights. I was all in! Did I mention the first flight leaves on Friday the 13th?

I realize this will make little sense to a non-runner and I’m not even sure it makes complete sense to me. What I do know is that running is a very important part of my life. It was the thing that helped me find a sense of self when I was a new mom struggling with post-partum depression. It makes me a better mom, wife, friend, and member of the community. It is my moving meditation. It may have taken many extra steps to get here but I am thrilled to be running Boston and even more thrilled I didn’t have to choose between the religion of my upbringing and the religion of running.