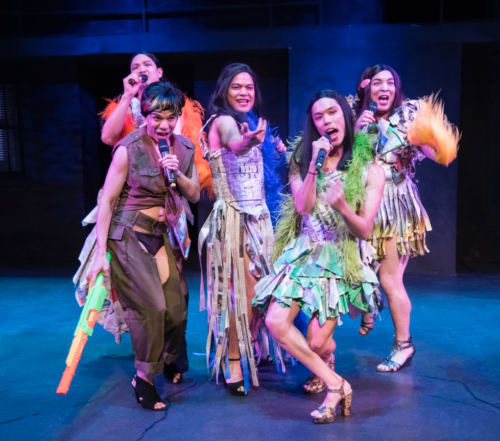 It’s getting more and more challenging for me to write reviews of plays at Mosaic Theater because all I want to say is, GO SEE IT! GO NOW!

It’s no different with Paper Dolls, A Play With Songs, playing through April 29. The play, written by Philip Himberg as a reimagining of Tover Heymann’s documentary Paper Dolls, is set in 2004 and revolves around a group of Filipino immigrants in Israel who are friends and who moonlight as a deliciously campy act called “The Paper Dolls.” The Dolls emigrated from the Philippines in part to seek employment and secure a better life for their families back at home. They also seek to put distance between themselves and their families who reject them for their homosexuality. Israel’s homophobia isn’t much better, but despite this, the friends make the best of their caregiving jobs–the only jobs available to Filipino immigrants– and enjoy performing their revues. When group leader Chiqui’s brother Jiorgio arrives, he introduces an element of aspirational dissatisfaction: He wants the act to be bigger and he resents the caregiving job his brother was able to secure for him.

What I have enjoyed most about Mosaic’s plays is in ample display when you watch Paper Dolls: there is a depth of investigation and attention to detail that starts within the chosen play and which comes alive on the stage. The ensemble works so well together to integrate their voices and movement and to perfect their accents that, for the duration of the play, you are immersed in early-aughts Tel Aviv.

Warning: You may walk away with “Enough is Enough” stuck in your head.

WHAT: Paper Dolls, A Play With Songs

HOW: Tickets are available here. For audience members who are deaf or hard of hearing, consider attending a performance with Open Captions. For more information about Mosaic Theater’s season, click here.