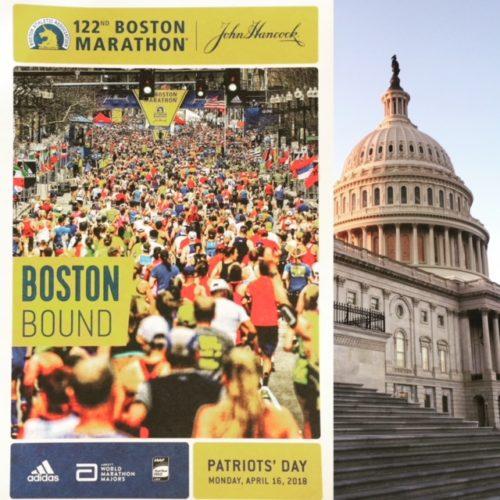 It wasn’t always this way. I hated running. When I began running thirteen years ago, I was an overweight new mom suffering from postpartum depression. I turned to running as a way to reclaim my life and to set a good example for my daughter. On April 16, I will run the Boston Marathon. Please join me over the next few months as I chronicle my journey from Capitol Hill to Heartbreak Hill

“Are you running Boston?” asked family and friends.

“Absolutely…. NOT!” I replied.

Everyone reacted as if I’d won the lottery and then proceeded to set all the money on fire.

“Why wouldn’t you run Boston?”

“Every marathon runner dreams of going to Boston!”

These reactions made me feel as if I’d returned a gift that the giver was sure I’d love.

The truth is, the Boston Marathon lives up to the hype and I was fortunate enough to earn a spot and run Boston in 2011. So why didn’t I want to run this most storied of races a second time? The first time I ran Boston, the weather was perfect, I ran a personal best and I finished feeling like I could turn around and run it again. On the course, I high-fived spectators, got hugged and kissed by the Wellesley girls, stopped at every water stop, took candy from strangers, and marveled that I made it up Heartbreak Hill without having either my heart or stride broken. Adding to all that joy, my husband was there with me and ran his best marathon too. There’s no way it could be that great a second time and I wanted to preserve my perfect memory of it.

To further prove my point, I cited how the next three Boston Marathons were somewhat disastrous. In 2012 temperatures reached 89 degrees causing many to drop out from heat exhaustion. In 2013, the horrific bombing and loss of life occurred. In 2014, runners had to contend with a cold-windy-rainy race. The odds were stacked against another perfect marathon and I was firm in my decision not to run.

Then something strange happened.

While I had been adamant that qualifying was enough for me, on the eve of Boston sign-ups I had a nagging feeling that I should put my name in for consideration. Yes, I said consideration. For the fifth year in a row, it has not been enough to qualify for the Boston marathon to guarantee entry; you need a cushion of time above your qualifying time and the cushion has increased almost every year. A cushion is a bit like placing a bet on your favorite football team. Your team must not only win; they need to beat the spread for you to collect the cash. And in the case of Boston the spread/cushion is determined after all applications are in.

The sign-up for Boston was on my birthday, which I took as a good omen and entered my name. Ten days later, I received confirmation that I was granted a spot in the 2018 Boston Marathon! Incredibly this year’s cushion was 3 minutes and 23 seconds: my exact time! Coincidence? Maybe or maybe not, but either way this squeakiest of squeakers is going to Boston!  (For those not familiar with running terms, a squeaker is the term used to refer to runners who qualify with a cushion of fewer than 5 minutes.)

I’m as excited for the many steps it will take to get the start line as I am to run the race. I never imagined I could go from barely finishing my first marathon in 5 hours and 10 minutes to running my second Boston Marathon.

If the thought of running a marathon or even running around the block sounds daunting, I get it. There was a time when I only ran to catch a bus! In the next few months I will not only chronicle my journey from Capitol Hill to Heartbreak Hill, but give practical tips and guidance on how to start running, my favorite local running routes, warming up to winter running, what to wear, how to stay motivated, and –of course!– the lowdown on our favorite local race, the Capitol Hill Classic 10K!