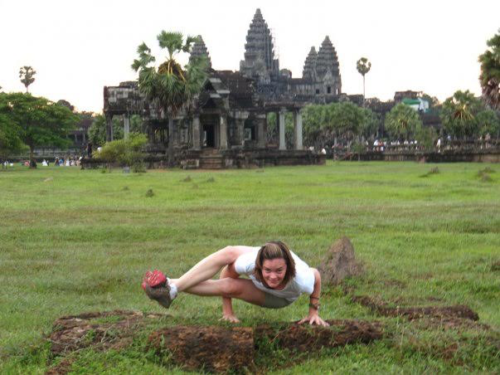 It’s been a little while since the last time we did a Five Questions. This week, it’s Betsy Poos’ turn. Betsy is the former co-owner of Capitol Hill Yoga, former Executive Director of CHAMPS and current co-owner of Realignment Studio. The answers have been lightly edited for clarity. Read on!

1. How did you become interested in yoga? Was it as easy as taking a class and getting hooked?

I was pretty resistant to yoga at first. I thought it would be boring and I didn’t want to take my shoes off for class. But in the end I guess it was as easy as taking a class and getting hooked. It just might have been the 10th or 20th class.

I grew up dancing and even taught kids dance classes throughout high school and college. Early on, I found my home and my voice through movement. But I wasn’t formally introduced to yoga until after moving to Washington, D.C. in 1999.  I was a congressional aide and taught a cardio dance classes at the Capitol Hill Gold’s Gym at Federal Center SW. I did it for fun and for the free gym membership. The gym manager asked me to take a weekend training course to learn Bodyflow, a class that blended yoga, tai chi and pilates.  I started teaching Bodyflow around 2002 and was intrigued enough to start seeking out yoga classes on my own.  I found a class I liked at the Joy of Motion in Dupont Circle. I used to take a jazz class there every weekend and started staying for the yoga class afterwards. It wasn’t love at first sight, but since I was teaching this blended yoga class at the gym I kept going back so I wouldn’t feel like a fraud. It was after one particularly challenging backbend focus class that I decided to take yoga seriously. I eventually changed my Bodyflow class into a full yoga class based on my own home studies. By that time I was working at the Democratic Congressional Campaign Committee and we had a not-so-great 2004 election year so just as the staff got the boot in January 2005, I ran off to yoga teacher training. Two weeks later, I was back in D.C. with a new job at a lobbying firm and started teaching yoga all over town. I loved the side hustle! Along the way, I’ve taken a bunch more trainings and specializations, began teaching yoga full time, opened a studio, got married, had a baby, sold a studio, had another baby, and opened another new studio. Through it all, my constants have been my yoga practice and my home here on Capitol Hill.

I feel strong when I practice yoga. I love both the movement and the stillness, and everybody around me loves that it calms me down!

2. How has the world of yoga/meditation changed since you’ve become regular practitioners?

When I started practicing yoga in 1999, it wasn’t popular. I don’t think namaste had even entered our lexicon. Just shy of 20 years later, yoga pants and Downward-Facing Dog are simply a part of our culture. I love that the benefits of the practice are being shared with more people every day. Yoga is for everybody and every body.

3. What habits do you guys have that people would find surprising?

How about five habits? I can’t function without coffee. I am a podcast junkie. I love reality TV. I find cleaning therapeutic. I live for a good bargain.

4. What is something you did not expect would happen about your current business/spiritual path?

Realignment Studio itself was a surprise along my business and spiritual path. Small business ownership is just plain hard work. The demands never stop and the pay is irregular to say the least. And yet, when I was presented with the opportunity to partner with Alyson Shade and open Realignment Studio I couldn’t pass it up. I trust Alyson’s vision as Founder and since opening in Summer 2017 our yoga community has steadily grown. The studio has also reconnected me with my personal yoga practice, which has been a gift of its own.

5. Finally, if you were granted three wishes with respect to your life on Capitol Hill, what would they be?