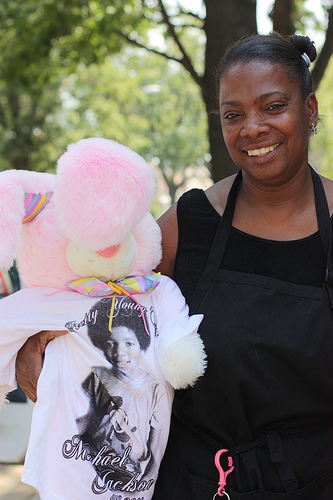 Jewel Hall. May she rest in peace. Photo by María Helena Carey

On Saturday around 11 a.m., Jewel Hall, one of our neighbors, was crossing H Street NE at 10th Street. According to reports from NBC and the Washington Post, a gray Honda Oddysey traveling south on 10th, struck and killed Ms. Hall. Eyewitnesses saw people fleeing from the car. It’s unclear from the reports whether the driver stayed on the scene or not.

We are shocked and horrified to learn that people inside the vehicle fled the scene. However, it’s upsetting to read sentences like this one in the Post’s article: “Authorities did not say whether the vehicle or the pedestrian had the right of way.” As upsetting as it may be to motorists, the District of Columbia law states, “When official traffic-control signals are not in place or not in operation, the driver of a vehicle shall stop and give the right-of-way to a pedestrian crossing the roadway within any marked crosswalk or unmarked crosswalk at an intersection.” Even if Ms. Hall was entering the street when it was not her turn, she did not deserve to be struck and killed. And really, even if she was entering the street in the middle of the block, no one deserves to be crushed by the wheels of a car even if their placement on the roadway mitigates the punishment for the motorist.

Our District is very positive about Vision Zero, and about reminding us that we are all pedestrians and that all District agencies seek to protect us and our right to walk safely everywhere. We want to believe that Vision Zero can work, and that the District takes pedestrian safety seriously.

(…as well as cyclist safety, but that is another blog post altogether).

Ms. Hall’s death is a stark reminder that we have a long way to go to make intersections safe. May she rest in peace. She will be missed.