The Barracks Row Fourth of July Parade, this Saturday at 10 am! 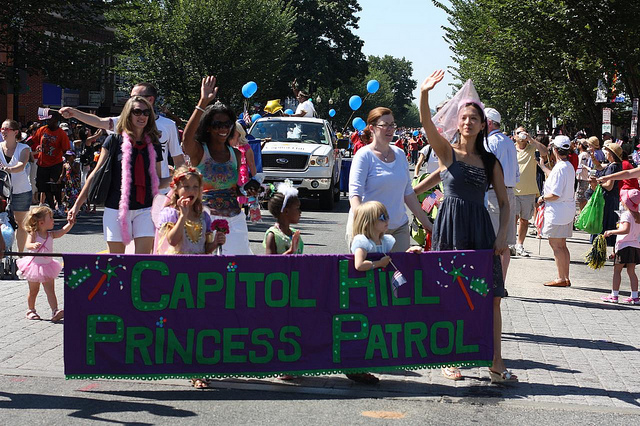 The Princess Patrol of yesteryear. Photo by María Helena Carey

Not to brag – and not that we need to remind you, Capitol Hill neighbors– but we truly live in the best neighborhood ever. One of the specific things that makes this neighborhood amazing, apart from the caring neighbors and the excellent cuisine, is the fact that we have one of the best-kept secrets happening every Fourth of July: the Capitol Hill Fourth of July Parade! (For an all-around special Fourth of July, read Claudia’s post on just how amazing celebrating in our backyard can be.)

A tradition that goes back at least a decade, our Fourth of July parade starts promptly at 10 a.m. every year. Fun Fact: The parade was started by Mom on the Hill Gina Arlotto, who decided that she wanted to mark the first July after 9/11 in a fun and patriotic way. Thank you for the wonderful tradition, Gina!

Marching groups start at the southernmost end of Barracks Row (8th Street SE at I street SE, north of the highway) and move north toward the Eastern Market metro plaza. If you are marching, your group is asked to show up early, around 9:15 a.m., and report to the staging area at the corner of 8th and I streets SE. If you just want to watch and catch the beads, join us starting around 9:45 a.m. 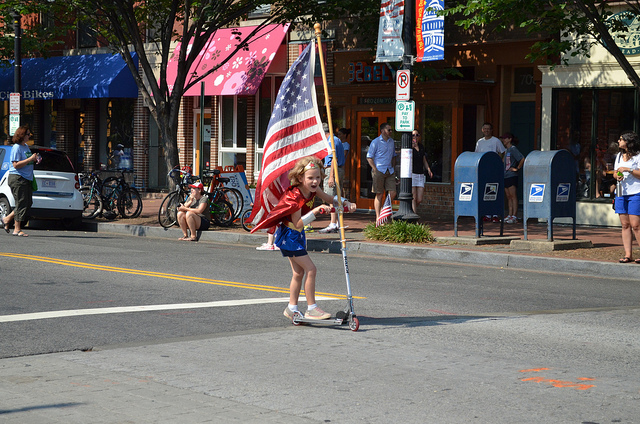 For the past few years, Realtor Phil Guire has been the organizer. For Phil it is his favorite day in DC, a day where you can really enjoy yourself in the neighborhood. Some of the groups who march include our local elementary schools, the Capitol Hill Restoration Society, the amazing Men in Blue from the Capitol Hill BID (they spin their cans around and dance!), the K-9 corps from Congressional Cemetery, Naval Lodge No. 4, The Commandant’s Own Drum and Bugle Corps, and many other local groups, as well as beautiful vintage cars and trucks. The parade’s Grand Marshall is Ward 6 councilmember Charles Allen. Mayor Muriel Bowser will also be marching in the parade, according to Guire.

Some groups have changed over the years, such as the MOTH Dress-Up Brigade. The Brigade, once known as the Princess Patrol changed its name last year because the concept became too controversial. Capitol Hill mom Dawn Arteaga, who is organizing the group this year, told me that the former name prompted some parents to ask why the group chose to support the monarchy; others wanted more gender equality for the kids.

No matter whether you march or watch, come join us for the best day on Capitol Hill! 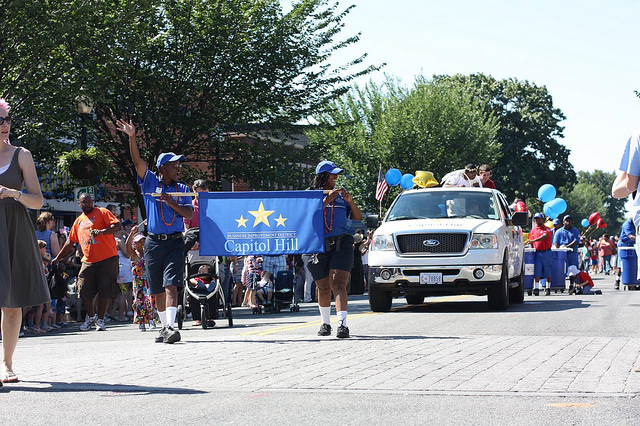 The men in blue! Photo by María Helena Carey.

What: The Capitol Hill Fourth of July Parade!

Where: 8th and I Streets SE, by the highway overpass.

Why: Because who doesn’t love a parade? There’s also candy and beads! Get pumped by looking at photos from prior years and see you at Barracks Row!