There has been freemasonry and freemasons on Capitol Hill since at least the day that the cornerstone of the Capitol was laid on September 18, 1793. George Washington was there that day in full masonic regalia, presiding over the ceremony. It was over ten years, however, before the masons officially opened for business on Capitol Hill. The lodge, which received its charter in 1805, continues to operate to this day. Today, we will look at their first meeting house and its fate.

On May 14, 1805, a group of masons working on and around the Navy Yard sent a letter to the Grand Masonic Lodge in Baltimore, requesting that they be given a charter to begin a lodge in the District of Columbia. Since there was no grand lodge in the nation’s capital at the time, they had to turn to the Maryland lodge for this right.

The charter was duly granted, and was given the name Naval Lodge No. 41, meaning it was the 41st lodge to be chartered in Maryland. The lodge had 49 charter members, and was led by one John Davis, of Able. Davis lived on I street between 10th and 11th SE, and worked at the Navy Yard. 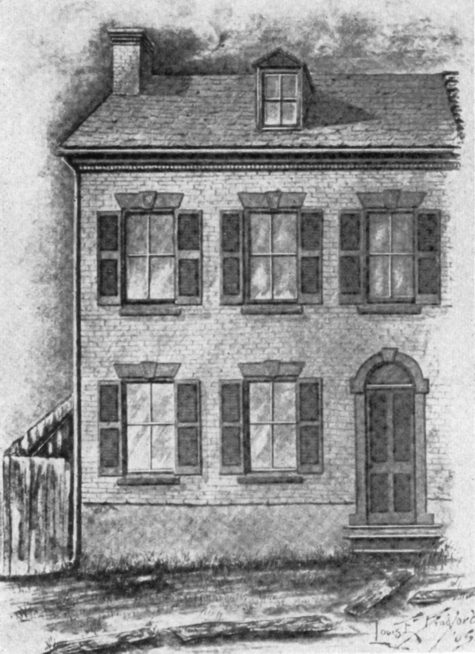 The new lodge then needed a place to meet, and soon came upon a house on 7th Street, between L and M streets SE, just a block from the gate of the Navy Yard. It was the perfect setup for the lodge, as they could use the upstairs for their meetings, while the downstairs was used by a school; the schoolmistress also took care of the lodge’s rooms upstairs. Furthermore, its location near both the Navy Yard and the market made it easily accessible to two important groups within its membership: Navy Yard employees and merchants at the market.

In 1810, there were six lodges in DC, though still only the one on Capitol Hill. It was decided that this was enough to create a new Grand Lodge, one that would encompass those lodges in the District of Columbia. On January 8, 1811, then, a convention was held in which this new lodge was formally created. The Naval Lodge now received the new name ‘Naval Lodge No. 4’ which it bears to this day. (This does not mean that it was actually the fourth lodge chartered in DC, each lodge in DC on that day was simply given an arbitrary number)

During these years the Naval Lodge had undergone a rapid expansion, and so shortly thereafter, a suitable piece of land was sought to build a proper masonic temple. They first had their eye on a piece of land just a few blocks up the street, but unfortunately they were stymied by the intransigence of the seller, and so the masons had to go looking further afield. Finally in 1821, they were able to move into a new, purpose-built structure on the NW corner of 5th street and Virginia Ave, SE, the site today of the Lenox School.

The old building remained standing for almost another 150 years, even as the neighborhood around it changed dramatically, including the building of the cable car building across the street. It was used as a home throughout this time, even as this part of town became notoriously rowdy. Some time after 1955, it was knocked down and today only a parking lot remains there.

My thanks to Isaiah Akin of http://www.naval-lodge.org/ for his tour and history lesson of the Naval Lodge!