Why: Because you want to know what’s going on in your Advisory Neighborhood Committee and you want to get to know the neighbors who are involved in local politics.

Also, because there is an ongoing saga with the fate of 301 Massachusetts Ave. NE, the space formerly occupied by Indian restaurant The White Tiger. 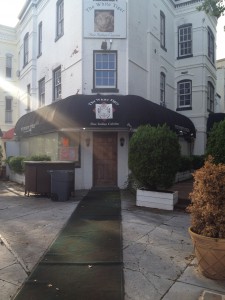 After several months of waiting, the current owner of the space is seeking an alcohol license that would allow incoming establishment Romeo and Juliet to stay open and serve alcohol until 2 a.m. on weekdays and 3 a.m. on weekends. While many business owners and some neighbors feel that Massachusetts Avenue can handle a higher traffic and that increased nighttime activity would be desirable and profitable, the neighbors do not share this sentiment. (Full disclosure: I am one of those close neighbors.) This is a feeling that goes beyond this part of the neighborhood, however: recently, a piece in the Prince of Petworth blog discussed how a new restaurant, The American, may negatively affect Blagden Alley when it opens. A while back, Dulce, a restaurant in the space now occupied by The B Spot, found it too hard to convince the neighbors to grant it a liquor license; it closed some time later. 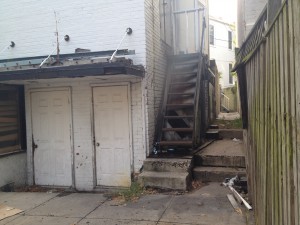 The back of the restaurant opens up into a narrow alley where there are signs of litter and neglect. Photo by María Helena Carey

TruOrleans, which closed amid a frenzy of terrible stories and an epic server-patron fight last month, was a constant pain to the area’s neighbors, who frequently had to deal with excessive noise, parking woes, public urination, and many other complaints.

While it would be wonderful not to see the corner of 3rd and Massachusetts dark, abandoned, and accumulating newspapers and empty cans of Miller Lite, and while it would be great to welcome more retail and another good restaurant to the area near Union Station,  it’s not worthwhile to let an owner neglect his property just so he can try to negotiate keeping his place longer than the other restaurants in the immediate area. 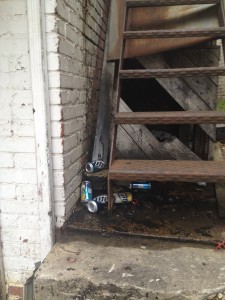 Litter under the stairs at The White Tiger’s former locale. There are many signs of neglect all around the property. Photo by María Helena Carey

This part of the Hill is already neglected by transient Hill neighbors –some of whom stick around to call the Hill home, but many of whom are here for only a short amount of time and do not have to deal with the long-term effects of having a late-night establishment so close to them for years.

If you want to have your voice heard regarding this issue, come this Wednesday, 7 p.m., to the Heritage Foundation.