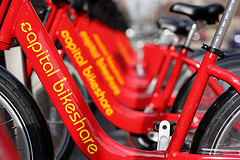 Originally uploaded to flickr by Mr. T in DC.

DDOT is asking for your feedback on the proposed placement of 25 new Capital Bikeshare stations. Our friends at Greater Greater Washington have, as ever, given us a useful introduction to the topic. If you’re really interested, the comments are also quite enlightening, though I hope some of those people also sent their comments to DDOT, but I digress.

Its been almost a year since CaBi stations started popping up around the city, and its popularity is undeniable. The distinctive bikes are ridden everywhere. Living, as I do, one block from a station and on a street with a bike lane, I see loads of bike commuters and errand runners daily, the plurality of which are now CaBi users. I even noticed a significant uptick in wintertime bike commuters.

So, how do you think CaBi is doing with its existing stations? Where would you like to see more stations?

According to the DDOT map, proposed station locations in our general area in NE include: 6/C (SE corner of Stanton Park), 7/D (By the library, please!), 6/H, 8/Florida and 11/H. And for SE: 3/Independence, 3/G, D/New Jersey, 15/Independence. Plus in the Riverfront at Half/M (ballpark) and 3/Tingey (Navy Yard). DDOT encourages people to review the expansion plan and send comments by email. There are 55 proposed locations, but only 25 stations will be added, so speak up for the Hill, H Street and the Riverfront if you want to see more density here. DDOT will hold a public hearing on this topic on May 25 from 6 to 8 pm at 441 4th Street, NW, Room 1107.

I think we are prime for several new locations. Remember way back when the Lincoln Park CaBi was a hot potato? Now it is incredibly busy, like other existing stations at 13/D NE, 13/H NE and the two at Eastern Market. In fact, if you don’t get to the CaBi station in my neighborhood by 8:30ish on a weekday morning, you better know when the next D6 arrives. And it isn’t just the morning commute — local stations are busy throughout the day and into the evening, including on weekends.

CaBi spent a cozy night in our living room.

CaBi works to rebalance throughout the day so that users aren’t out of luck, either without a bike available within a reasonable walk or returning with a bike only to find a full dock. That is how one lovely CaBi bike spent a cozy evening in our living room last week. My husband picked up a bike at Eastern Market after a late work dinner. He checked Spotcycle and headed home to one of the 2 docks it said was available at 10:30pm. Except when he arrived 5 minutes later, those docks weren’t open. The next two closest stations were full too. And so, we provided an evening’s hospitality to the bike. Which kinda surprised me since I didn’t know this until I went downstairs the next morning. [Note: If this ever happens to you, call CaBi immediately (the number is on the bike). They will give you some alternatives, including permission to keep a bike overnight without penalty. We eventually had the $70 charge reversed.]

This particular problem was primarily one of system management. But additional stations would help with managing what is clearly high utilization in the area. Looking at yesterday’s (Tuesday, 4/26 – the feed updates each day to show only the previous day) bikeshare usage stats, three local stations – 13/D NE, 13/ECap (Lincoln Park) and 7/NC SE were out of compliance – meaning they were either full or empty beyond contractual time limits. Others locally are borderline. Then there are the gaps. H Street NE, in particular, has quite a stretch between 3rd and 13th without any stations. 7/D NE would fit nicely between 13/D and Union Station. I’m sure many of you could think of deserts in your part of the neighborhood that could use a CaBi oasis. So check out the proposed map and let DDOT (and us) know what you think.