Digging through old documents is one of the great joys of a researcher, and the thrill of finding a new fact – or at least the hope of finding one – keeps you going through long stretches of irrelevant words. Unfortunately, sometimes the finds can turn out to be false, and lead to great disappointment – or a long time chasing after chimeras.

Thus when my THIH colleague Tim recently dug up a map purporting to show DC as it appeared in 1800, with most of Capitol Hill labeled “Hopyard” we were briefly very excited that we could use this as part of our alcohol tour of Capitol Hill.

Until I remembered that this was simply a miss-spelling of Houpyard, and named for Walter Houp, rather than for the flowers that add taste to our beer.

Walter Houp is a shadowy figure in the history of DC. He was one of the original patentees of the lands that make up the city, which meant that – some time in the late 17th century – he was given the right to a certain amount of land in the colony then run by Lord Baltimore. Houp then went out to find land that hadn’t yet been claimed, surveyed it and thus claimed it for himself. The land he found was along the Eastern Branch of the Potomac river, ie, the Anacostia, and stretched north for a few miles.

It is unclear what, if anything, Houp did with the land and, in fact, by 1700 Walter Houp had returned to England where he worked as a linen draper.

Houp’s name was only briefly revived in the 1930s when the National Society of the Daughters of the American Revolution donated a monument celebrating the original patentees of the land on which DC was built. This stone with their names was placed on the ellipse near 15th street, where it can be seen today. 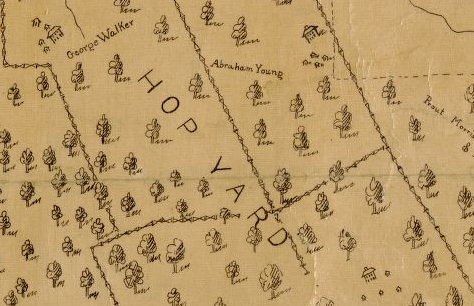 Detail of mid-19th century map showing what the are on which the capital was to be built looked like ca. 1790. (Library of Congress)

Houp’s final claim to fame came more than 40 years later, when a couple living on an alley north of Lincoln Park needed help selecting a name for their alley. They had been told that only people living on named streets could get mail delivered to them. The couple contacted Ruth Ann Overbeck for assistance in determining a name. She describes what happens next in an interview she gave to the Capitol Hill History Project.

Well, it took me going back to the 17th Century to find a name that would be acceptable to all of the people who had to rule on it, which began with the ANC Commission, the ANC 6A, which is dominantly African-American. So, [we could pick] none of the people who had slaves, virtually no one who was white-white, in Jim Crow days, none of the big speculators who had come in and bought some of the property that belonged to some of the African-Americans, certainly no one from the pre-Civil War era. On and on and on.

Walter Houp was the one person that I could find about whom there was no record of slave ownership. That does not mean he did not own slaves, and I explained this to the ANC Commission. But it does mean that he neither abused them – nothing came up in the court records about them, which means if he had family groups he kept them intact, because he didn’t sell them, et cetera.

So they decided they would accept Walter Houp Court.

If you want to have a look, the court is off 11th Street NE, just north of Lincoln Park.