Ghosts of Capitol Hill: Another Ghost in the Capitol

On September 24, 1895, the Washington Post ran an article with the intriguing title “A Capitol Ghost Story.” Reprinted from the Kansas City Times, it related a story told by Colonel Brent Stacy, who had been a tour guide in the Capitol for “several years.” During this time, he saw numerous “queer things” of which the ghost of the crypt was the most interesting. Today we’ll look at this story a little more closely.

Apparently, one evening a soldier was left behind in the crypt –- and was never seen again. Only his ghost is known to inhabit the lower reaches of the Capitol building, and “his spirit is supposed to be cavorting around there yet looking for a way out.”

The article proceeds by telling of the time when the ghost of the crypt “very nearly caused a tragedy.” Apparently, the young wife of a newly elected representative from Illinois became lost in the lower levels of the Capitol one afternoon during a tour. All attempts to find her failed, and her party eventually left, assuming that she had found her own way out.

The next morning, a further attempt was made to find her, as she had not appeared outside. During the subsequent search, she was found in “the darkest passages of the crypt, where she had been all night with the rats and the bugs.” And, presumably, the ghost of the lost soldier. The article continues: “They picked her up, but when she got home she was a raving maniac. The terrors of the night had been too much for her. The congressman took her to their Illinois home and I never heard from her afterward.” The correspondent reports that he had lately seen her in the Illinois State Insane Asylum in Jacksonville, where her formerly great beauty and intelligence had entirely disappeared, though she was still a young woman. 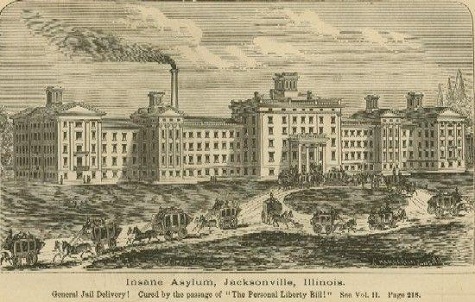 The Illinois State Asylum at Jacksonville in 1873 (Awesomestories.com)

Unfortunately, the only hint as to who the representative might be whose wife was thus afflicted is the first letter of his last name: F. There are 10 representatives to whom this might refer to, but only one for which any of the other clues match.

John Frederick Finerty was born on September 10, 1846 in Ireland, but came to the United States as a young man. In 1882 Finerty married Sadie Isabelle Hennessey, who was born in June 1863 and thus turned 19 in 1882, the year Finerty was elected to Congress as an Independent Democrat. He and is wife  moved to DC in early 1883. He only represented his district for one term, which would be consistent with having a wife in an insane asylum.

Except that Finerty actually ran again, casting his lot with the Republican presidential candidate, and thereby lost to the ‘real’ Democrat. Furthermore, there is no indication that Mrs. Finerty was ever confined to an asylum, and in fact during the years that the story covers, she was producing children with her husband.

So the question remains: Which congressional spouse was driven insane by a night spent in the basement of the Capitol? Or was this all just a product of the fertile mind of Col. Brent Stacy?  It’s certainly something to keep an eye out for when in the lower depths of the Capitol.

Robert Pohl and Tim Krepp continue to offer ghost tours of Capitol Hill through the month of October. More information and reservations at WalkingShtick.com