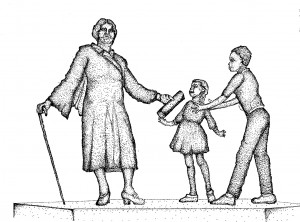 As much as we all love Lincoln Park, there can be no doubt that its main statue is, at best, condescending, and at worst, downright racist. This is no new insight: public outcry about its subtext made the sculptor make some minor changes even before it was cast. Given this controversy, it is unsurprising that there would eventually be a call to, if not remove the statue, then at least mitigate the message.

The mitigation took the form of the Mary McLeod Bethune statue, whose 35th anniversary is being celebrated this week. Below the jump is a brief history of Ms. Bethune and her statue, as well as full information on both the official and unofficial celebrations being planned. Join your neighbors at one or both of these to learn more about Lincoln Park’s second most famous statue.

In 1959, the National Council of Negro Women (NCNW) began fundraising for a memorial to Mary McLeod Bethune that was to be unveiled on January 1, 1963, the 100th anniversary of the Emancipation Proclamation.

Bethune was born on July 10, 1875, the youngest daughter of two former slaves. The family was so poor that only Bethune could be sent to school. It proved a wise choice, as she not only learned rapidly, but would come home and teach her parents and siblings what she had learned that day. This love of learning continued on as an adult: In 1904, after several jobs as a teacher, Bethune opened her own school in Daytona Florida. This school, opened with $1.50 and five students, would eventually become Bethune-Cookman University.  Bethune was also known for helping found the NCNW in 1935, and for being a part of FDR’s “Black Cabinet” as well as close friend and advisor to Eleanor Roosevelt.

Fundraising for the memorial took longer than expected, but eventually on July 10, 1974,  Bethune’s 99th birthday, the statue was unveiled in Lincoln Park. Much work was done in the park beforehand, including lowering the part of the park in which the new statue was to be placed – so as not to rise above the Lincoln statue – and turning the Lincoln statue, which had formerly faced the Capitol, so that it would face Bethune.

Twelve hours before the formal unveiling, a group of local kids from the neighborhood came to do their own, personal, celebration of Bethune. The Washington Post quoted a participant: “’Hey, man, you know how those official ceremonies are,’ said Charles (Pee Wee) Jackson, who lives across the street from the park. ‘They’ll probably have some symphony orchestra and everybody will be all dressed up and everything. Se we decided to come out here tonight and welcome Mrs. Bethune in our way.’”

It is in Mr. Jackson’s spirit that I invite all readers to join us for an equally unofficial celebration in Lincoln Park on July 9th at 4:00. We will have instruments for kids to play, and historian John R. Wennersten will be on hand to expand a bit on the history outlined above. There will also be a formal 35th anniversary celebration organized by the NCNW on July 10 at 6:00 PM.