Where Will Right Turns Be Banned on Red on the Hill? Eastern Market Main Street to the Rescue! 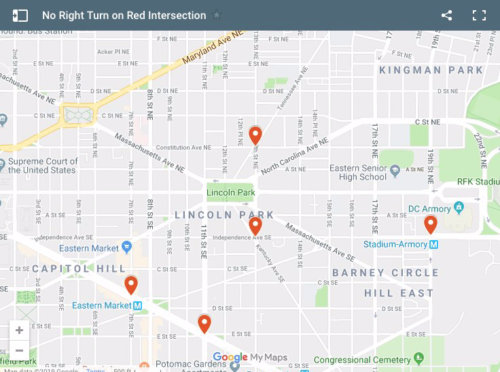 Perhaps you saw the item on last week’s Hill Buzz regarding where the District will enforce no right turns on a red light and hardening of left-hand turns. We shared WTOP’s link, who shared a districtwide breakdown, ward by ward taken directly from the DDOT press release. The intersections in Ward 6 that will become “No turn on red” intersections are as follows:

The image above is a small part of the larger map which you can see and click on below:

We don’t know about you, but even though a list is a fine place to see things, you don’t really visualize where things are until you see them on a map. Enter Eastern Market Main Street, who shared the map you see on the right via Twitter, highlighting the intersections in our immediate area that will see the change in law, as well as the map above. Thank you for sharing this!

Don’t worry– enforcement won’t be official until later in the year, and you have until February 5, 2019 to comment on these proposed changes. Where can you comment, you ask? Apparently, the only way you may submit your opinion is by writing to DDOT directly to the following address:

Get your quills and parchment out and tell DDOT this is an excellent idea. A BIG thank you to DDOT, for letting me know you can comment electronically by writing to vision.zero@dc.gov. Yay, technology!!!