Happy New Year!!! Welcome to the first Hill Buzz of 2019! Hope you were able to rest and find joy in small things over the holidays. Frankly, I’m still trying to RELAX AND ENJOY THE RIDE, but the yelling isn’t helping. How about you? 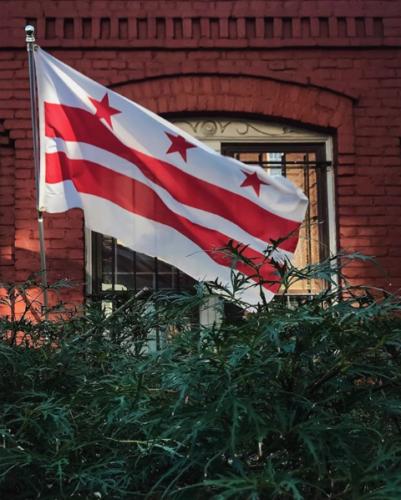 I started my year off DC Proud. Did you? Photo by Maria Helena Carey via #thehillishome on Instagram

Let’s kick it off with my hero, Dave Barry, and his look back at 2018. I love you, Dave Barry. Washington Post

Did you really pay attention to the 2018 news that made us all chuckle/roll our eyes/stare with fear into the gaping maw of the unknown? If so, Washingtonian has a quiz for you!

Washingtonian also has a list of local celebs who moved around in 2018– among them, Gene Weingarten. When I saw the photo of (formerly) Gene’s Victorian with an English basement, I remembered his 2011 column about digging out the basement to stop his wife’s crying. You’ll always have those memories, Gene.

(Aside: While we all hate sexual harassers and that kind of bad behavior, is it necessary to refer to Mike Isabella as “disgraced restaurateur Mike Isabella”?)

Our condolences to the Marines and the Marine Barracks family, as one of their own was killed by an accidental weapon discharge on Tuesday morning, 1/1/19. Washington Post (by way of the Chicago Tribune)

In depressing news that you already knew, 2018 was not a good year for cyclists or pedestrians in our region. We understand that Vision Zero is not something that happens overnight, but when things go in the WAY opposite direction, it feels as though whatever progress we may have made by having more infrastructure and awareness is just not enough.  DCist

In related news, many intersections around DC will allow NO TURN ON RED and WTOP has a map of where that will happen. My hope is that there will also be adequate enforcement so drivers don’t feel like the rule doesn’t apply to them. I am looking at you, drivers who routinely think the NO TURN ON RED at Massachusetts and 4th NE does not apply to you– especially the gentleman with whom I traded barbs* a few weeks ago because he nearly ran me over after skipping that red.

Greater Greater Washington spends some time analyzing the past, present and future of Hill East. My only real question here is, who decided that Hill East starts at 15th Street SE? And is Hill East in southeast only? The questions, they are burning.

Did you kick off the new year DC Proud? You missed the inaugurations and the 5k, but check out more events from the Mayor’s office here.

In case you missed it, we ended 2018 with some good old fashioned “white powdery substance” type excitement around here. I wrote a post about it, NBC has a recap and the Washington Post quoted our own Robert.

Yep. Trash is accumulating at our local parks thanks to the shutdown. Is this the part we should enjoy most about this particular ride, I wonder? Thank goodness for the Capitol Hill BID and the Men and Women in Blue. WUSA-9

Poignant quote in this The DC Line opinion on RFK: “… the mayor should take a step back and lead by engaging the community in a robust way, including gathering input from the neighbors who live next to the site, residents of all eight wards, and yes, even those who live elsewhere in the Washington region.”

The Anacostia Playhouse was robbed on Christmas Day (shame on you, robbers) and a GoFundMe was launched later that day by our friend Nikki Peele of Congress Heights on the Rise. Broadway World has more details about the Playhouse.

* By barbs, I mean we flipped each other off and yelled.