January 1 of this year was an important moment for all of us who are interested in the public domain: For the first time since 1998, works that had before been under copyright were now free to be republished, edited, and combined with other works. The Copyright Term Extension Act of 1998 (variously known as the Sonny Bono Act or Mickey Mouse Protection Act) had added 20 years to all previously published works.

This change was, of course, of great interest to Gutenberg.org and Archive.org, both of which freely distribute works that are no longer under copyright protection. Surprisingly, neither of these made a big deal about it. Only the Hathitrust pointed out that they now had new works available, and so I immediately set about searching through the newly freed works to see if anything was of interest to me and, more importantly, relevant to my interest in Hill history.

I should hardly have been surprised to discover amongst the newly freed books an item named Capitol Hill: A Novel of Washington Life. Published in 1923, it told the story of Ralph Dolan, a young man on the make who wakes up one morning in Washington in 1912 and finds that the young woman whom he thought he was hustling the night before has, in fact, taken him for all he is worth and disappeared.

Dolan is, therefore, stuck in Washington and becomes a Hill staffer, a reporter, and finally a lobbyist. Through this career, he becomes intimately aware of the workings of our nation’s capital in the years around the first world war. Dolan is amusingly lacking in morals, and thus the perfect person for all the jobs he finds himself doing.

The author of this works was one Harvey Fergusson (pictured), who used what he had learned as a reporter in Washington as well as the fact that his father was a Congressman to write this book. It was his second work, the first was called The Blood of Conquerors, which was the first of a trilogy of historic novels set in Fergusson’s home state of New Mexico. The third book of the trilogy, Wolf Song is generally considered his best work. 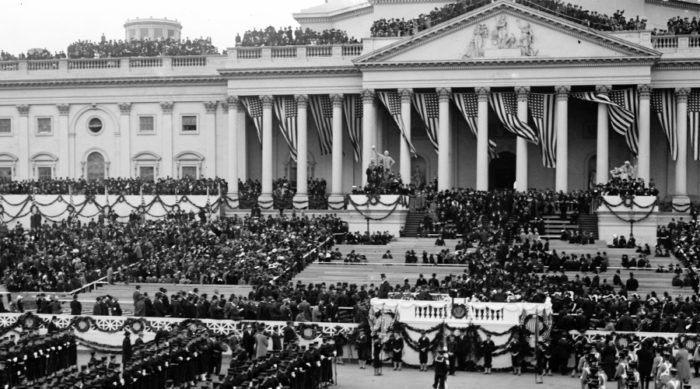 The inauguration of Woodrow Wilson in 1913, one of the events depicted by Fergusson (LOC)

Capitol Hill does not shine as a great work primarily due to its lack of plot. There is no antagonist against whom Dolan can struggle. Instead, it is interesting in telling the story of Washington from 1912 to some time after the first world war. The insight into the ways of Capitol Hill are interesting, but hardly make this a must-read book. A saving grace is that Fergusson is quite obviously a good writer and his prose keeps the book readable and enjoyable. It is also not an overlong work, which is certainly in its favor as well.

In short, it looks as if we will have to wait another four years, when “Wolf Song” comes out of copyright protection to see what Fergusson really has to offer. In the meantime, you can look through the 53,472 works that the Hathitrust has opened for reading.