Last week, we looked at an early attempt to film on the east front of the Capitol, and the mistakes made in the reporting in the immediate aftermath. Today, it is time to look at what happened to the film thereafter.

While the Capitol Police spent most of their time pointing fingers, and, in particular, trying to ascertain which of their number had been on duty on the east front, and therefore responsible for allowing this breach of the peace to occur, the New York police went about their business in a more direct manner: confronting Lew Dockstader and demanding the exposed film. They had done so, according to news reports of the time, after a call from the secret service requesting that they might see the films.

By Friday at 8 p.m., 36 hours after they had been shot, the films were back in D.C. and in the hands of the police. The Washington Times the following day described what happened next

The long string of films bore close resemblance to the tape which runs through the ticket in a stock broker’s office, and it required but a few seconds to tear the narrow slip of paper into small bits and throw them in the fire.

The same article also outed John A. Jones, “a bicycle man” as the officer responsible for failing to stop the unauthorized shoot. Much was made of the likely consequence for him, whether a court martial or just simple dismissal. It then proceeded to an interview with Dockstader, who seems surprised by his sudden notoriety: “I cannot understand how the impression got abroad that I intended to ridicule President Roosevelt and drag Booker T. Washington into unpleasant notoriety, and when [NYC police inspector George W.] McClusky told me about it I was completely flabbergasted.” Dockstader also explained why he had done his deed at 8 a.m., as he wanted to have the film be a surprise during his upcoming season, and not as some kind of publicity stunt. Had it been for the latter purpose, he “would have taken pains to let the newspaper boys, who are friends of mine, in on the game.” He ended by adding that “One of the guards saw us as we left, and, thinking Ellis was the President, touched his hat in salute.” 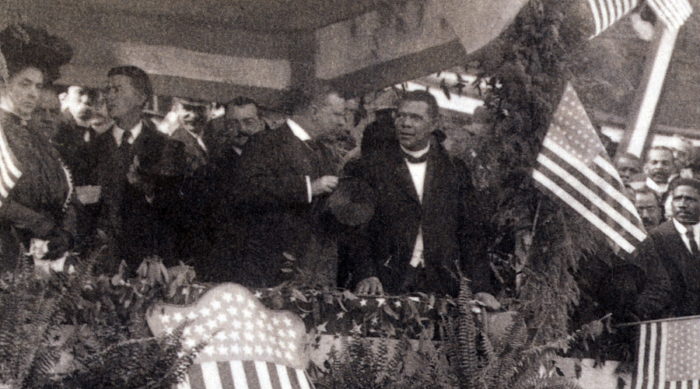 Ten years later, Dockstader’s account would be questioned in the article ‘Making “The Movies”’ written by Roy L. McCardell and published in The Green Book Magazine of February 1914. In it, McCardell states that the “light-struck film … burned by impressive Secret Service men” in the White House furnace was, in fact, unexposed, and that the actual film remained in a vault and protected by Edwin S. Porter (pictured), who had been responsible for the original filming and who had turned over an undeveloped negative to the Secret Service agent demanding the film exposed on that fateful day in 1904. McCardell claimed that Porter was still attempting to get permission from Roosevelt to show the film to more people than had seen it at the time.

Charles Musser, in his 1991 book Before the Nickelodeon, says that the film was, in fact, destroyed shortly thereafter in a fire that destroyed Porter’s personal archive.