Filming a movie on the Capitol Grounds is far from easy today (and the areas open for this are well back from the building itself) As it turns out, it wasn’t easy back in the day, either – and could get the police in multiple cities involved in destroying the film being produced.

At about 8 a.m. on May 19, 1904, passersby at the East Front of the Capitol were treated to an odd sight. The Washington Times of that evening described it thus:

In another minute a man bearing a close likeness to the President descended the steps of the Capitol and entered a handsome landau, drawn by two beautiful, long tailed horses. The carriage drove toward the prostrate negro, and as it passed the occupant, who looked like the President, signaled his driver to stop.

The carriage was halted, the mock President jumped out and knelt down by the fake Washington; giving every indication of deep concern at the plight of the unfortunate negro. Calling his footman to his aid, the supposed President put his arm around the negro and helped him into the Presidential equipage. The two went off together, the negro supported by the white man.

While one can hardly fault the writer’s style, he does manage to get a number of facts wrong. Probably most egregiously, the “negro” was none other than Lew Dockstader (pictured) in blackface. Furthermore, he was not supposed to represent Booker T. Washington; most likely, this misapprehension was made because of Washington’s recent visit with President Theodore Roosevelt at the White House. Finally, what Dockstader was trying to create was the impression that he had recently fallen from an airship, as riding around in such a vehicle was a part of his minstrel show. Less surprising is that they did not manage to determine who had played Roosevelt in this vignette: It was Harry Ellis, who had recently performed with Dockstader in New York. 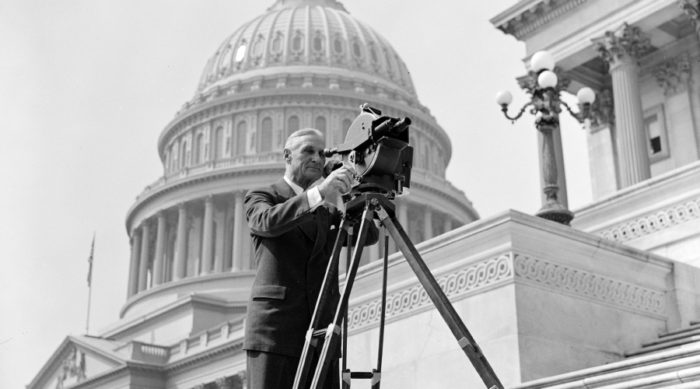 Since no picture of the filming in question exists, here is a picture of Senator William McAdoo filming in front of the Capitol in 1938. (LOC)

News reports from the following days addressed some of these issues, but mainly focused on the fact that the Capitol Police had allowed this to happen at all. There seemed to be a remarkable amount of angst around the film thus produced, though no reason was given as to why it should be an issue. In his 1991 book Before the Nickelodeon, Charles Musser posits that supporters of Roosevelt were concerned that his meeting with Washington had caused difficulties with the President’s supporters in the South, and that this film would be exploited to exacerbate exactly this rift.

Next Week: What happened to the film.

Tags: Before The Nickelodeon, filming, Hollywood on the Hill, movie, movies, Theodore Roosevelt