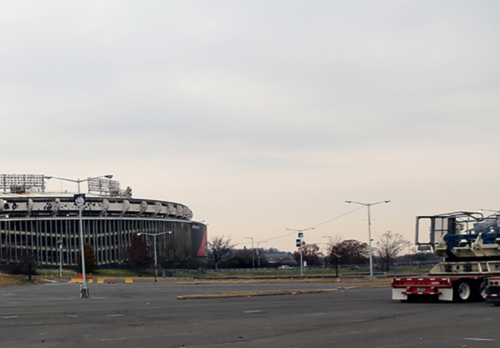 Detail of the photo on the Hail No RFK website. Via screenshot.

This week, we learned that the Mayor has been in talks with Republican leadership in congress to retain control of the federal land on which Robert F. Kennedy memorial stadium (RFK) sits. While it’s a worthy goal to try to keep the District in control of these lands, achieving this goal seems to be a stepping stone in building a new stadium for the Washington Football team in the same location– a decision most residents in the Hill East neighborhood oppose.

A group of concerned residents has started an online petition titled Hail No RFK. If you would like to support those who do not want to see a Washington Football team stadium built on the premises because you believe that the campus could be so much more for the people of Capitol Hill, Hill East and the District of Columbia than a stadium that would sit vacant for more than 90% of the year, sign the petition. You can click here to go sign.

Alternatively, you can send us a comment, tweet or email on why you think it’s a good idea to bring the stadium back. We encourage you to keep discussion civil.

Hail No RFK reminds me of when neighbors protested the Shell at the northeastern corner of 14th and Maryland, NE. Their rallying cry was #ShellNo. Shadly, there ish a Shell shtation at that location now.