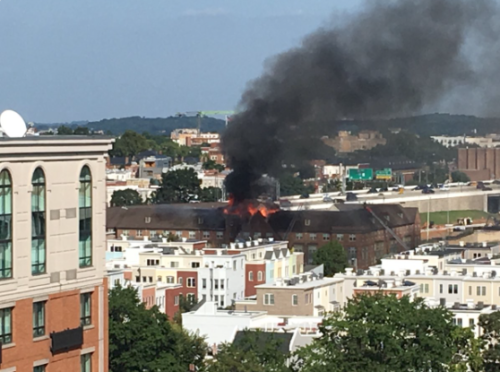 By now it’s been five days since a fire destroyed the Arthur Capper Senior Apartments, 900 5th Street SE. Today, the Hill Rag’s Elizabeth O’Gorek reports that a 74-year old man and a resident of the Capper Apartments, was found in the rubble. During a press conference at 10 p.m. on September 19, the day of the fire, Mayor Bowser asserted that everyone in the building had been accounted for, as reported by DCist. There will be a media update later today, which will hopefully shed some light on the situation

In the meantime, here are places where you can help the Capper residents:

According to the Mayor, the area is now safe for fire marshals, investigators and utility workers to get in and do work.

Allyn Kilsheimer, the structural engineer, was among the team who found the gentleman at the Capper apartments. He was carrying out a check and mapping the structure. When structural crews came knocking on doors, the gentleman answered. The gentleman seemed in good spirits and had a good sense of humor, according to Mr. Kilsheimer. When he was told not to move while crews opened his door with a crowbar, he joked, “I’m not going anywhere.”

Mr. Kilsheimer was not sure how much of the building can be saved at this point, and stated that work will be done to assess whether it’s more cost effective to rebuild it or to repair it.

A team of professionals will be going in and getting personal belongings out for residents.

Fire chief Gregory Dean asserted that at the time of the fire, debris was falling and the building was not structurally stable; firefighters were only able to conduct a primary search. Coordination efforts can fail when completing a difficult task.

Regarding whether anyone was looking for the gentleman who was rescued, Mayor Bowser asserted that no one was looking for him. “Within 24 hours we were able to …relocate everyone and get them in transitional housing.” She emphasized how much of an achievement it was to be able to relocate the 161 residents, many of whom have limited mobility.