Eleanor Holmes Norton, Candidate for Delegate to the House of Representatives 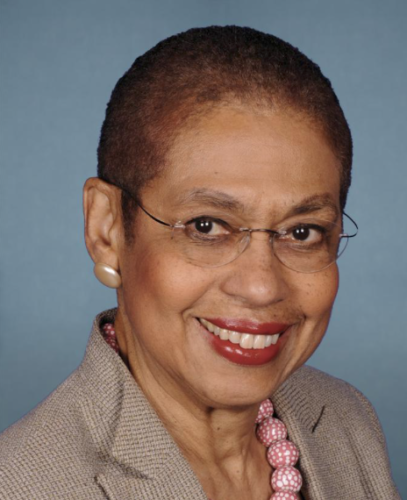 I recently sat down with Eleanor Holmes Norton, candidate for U.S. Delegate to the House of Representatives for the District of Columbia and asked her to introduce herself and her platform. Even though Del. Norton is a seasoned incumbent, we appreciate her taking time to talk to us about her accomplishments and plans.

Kim R. Ford is challenging Del. Norton this year: You can read or listen to Ms. Ford’s answers to my questions here.

The transcript of our conversation is below, for those who prefer to read or who are deaf or hard of hearing.

If you would like to skip to listen to a particular segment, you can let the time stamps at the beginning of each paragraph be your guide.

Maria Helena Carey: [00:00:01] We are in the Rayburn Building today talking to Eleanor Holmes Norton, who has served as delegate for the District of Columbia since 1991. She is running for re-election and has graciously taken time out of her busy schedule to talk to us. Please introduce yourself a little more in-depth and thank you for talking to us.

Eleanor Holmes Norton: [00:00:19] Welcome to my office in the Rayburn. This is part of the Capitol. I’m in this office because it comes with my seniority. You get a bigger office the the the more senior you are. You should have seen what I had when I first came here. I’m sorry– what was your original question?

Eleanor: [00:00:40] I’m Congresswoman Eleanor Holmes Norton. I’m running again and relishing it because the Democrats look to have a very good chance of taking back the House in which case with my seniority and my reputation in the House I could become a committee chair. That would mean more power than the District of Columbia with its voteless self has ever had. So I am particularly relishing this election period because I think we really have something to look forward to other than trying to get the Republicans to do the right thing. I had a fair amount of success with that and worked very closely with some Republicans. But wouldn’t it be nice to be in a Democratic House and maybe even a Democratic Senate?

Maria: [00:01:33] Please give us a brief summary of how you have used your many talents to make the office of the delegate what it is today.

Eleanor: [00:01:41] Above all I didn’t walk into the House of Representatives thinking about what I didn’t have. I had had a career as the chair of the Equal Employment Opportunity Commission. I’d been a tenured professor of law and I never considered myself a disempowered person. You don’t come to the House to say, What can’t I do for the residents of the District of Columbia? So that I have found that the Delegate’s office is what you make of it. I have every single right that every other member has, except that final vote on the House floor. That means, for example, I could become a committee chair if the Democrats take control of the next Congress. That means that in committee right now, I have been able to get bills through even without being chair of the committee. There are whole sections of the District of Columbia that are my bills have built: For example, the Southwest waterfront, now called the wharf, the south east waterfront. That was unused land going two ways with no tax revenue for the District of Columbia. Ther’s the so-called “NoMa,” the part above the Senate: This was another area with no good use, no taxes to the District of Columbia that’s been redeveloped. I’ve just gotten land transferred to the District of Columbia at the old hospital in Ward 4 and that is going to be made into amenities and housing for the District of Columbia. So I…. it did matter to choose your committees very carefully and that’s what members do. They say, “what committees can enable me to do the most for my District? So I was from a farm state, I guess I’d be on the Agriculture Committee. The District wasn’t exactly clear or obvious, so I had to do a lot of thinking and I’ve been able to rebuild or build for the first time whole sections of D.C. because I figured out that on one of my committees, Transportation and Infrastructure, there is something called Economic Development Subcommittee and it is out of that subcommittee that I have been able to make these additions to our tax rolls or with all kinds of amenities and jobs and, yes, housing for the residents of my city.

Maria: [00:04:20] How has the office of the delegate changed in the past 15 terms. You mentioned briefly that your office space has changed. Would you like to add more to that?

Maria: [00:06:17] In a recent interview you were quoted as saying that this is not the year to challenge you on account of your influential seniority which we’ve already discussed. I would like you to elaborate on that quote. And as a follow up would you ever be open to mentoring someone who would carry on your legacy?

Eleanor: [00:06:36] Look, I’m mentoring all kinds of people right now, I’m sure. But of course anybody wanted to know what to do. You a delegate. I’m still around I’ll tell you except I’m not going anywhere. I have been banking seniority. Everybody wants that seniority. The more you bank the closer you are to have being in the congressional leadership and chairing a committee. Now is the time to use it. And if I am reelected out I am in a Democratic majority. I’ll probably be able to keep these so-called riders or amendments off of our bills. Just think about that: That even as I speak in every single Congress I have to block, and I’m able to do it but with some difficulty, amendments to wipe out all the District’s gun laws. There were three of those amendments last time: I stopped them all. And I’m usually able to do it because my seniority and my influence is not just in the House. It’s in the Senate, because in a house they almost do anything the Republicans want them to do. But I’ve been able to stop guns from being… Our gun safety laws have been taken from us because of the work I’ve done in… In the Senate and that’s even though Marco Rubio, why by the way represents Florida where Parkland is, has been the chief proponent in the last three Congresses. So you gotta do what you can do and not say what I think is really not true that the delegate has considerably less power than somebody else. And I think my bills show that if that’s so I would challenge them to say what with a vote I could have done more. I tell you what I could have done more: Vote! I could have voted! But I couldn’t have gotten statehood with a vote for example, because that takes a lot more than having the vote. So the one thing I could have done is what I try to do now through social media and through releases: Have a register of where I stand on national issues, instead of having to tell my residents because I can’t do that final vote on the House floor I think they know where I stand. But I have to tell them. Because when that bell rings, I don’t get to go down there and put my marker up there that said how are voted. That is an insult to the residents of the District of Columbia who are number one. This is an important thing for residents to remember: You are number one per capita in taxes paid to support the government of the United States. And yet, you alone do not have the vote. That’s a total and complete insult. It’s an insult and defamation given why the Revolutionary War was fought in the first place! Taxation without representation! It’s one of the things that eggs me on, is to try to make the country live up to its first principle: No taxation without representation.

Maria: [00:09:45] Thank you so much for sitting down for talking to us and for your wonderful answers and my last question is just opening the floor to you. Why should people vote in and any parting thoughts?

Eleanor: [00:09:57] First of all, let me just say how thrilled I am that we have our own blog on the Hill. We’ve got a lot of stuff but I didn’t know we had our own blog. So I have to follow you. What I want people to know is, first and foremost, how much I have appreciated what is really quite strong support, even though I have not been able to get statehood. And I think the reason I have that support notwithstanding statehood is that there are sophisticated residents in the city who know what it takes and what it what it doesn’t and have applauded how close I’ve gotten, for example almost the House vote. But I do want my good friends, the people who voted for me in such large numbers before, to know that in some ways this is more important than ever. This time I did have I was in the majority for a short period before but I didn’t have the House the Senate and the Presidency at the same time and I don’t suggest that all you is one fell swoop and you’ll get statehood. What I am saying that even as I’ve made incremental progress toward statehood, I’m asking people to vote for me again because I’ll make better progress if we have a house and senate majority and I’m asking them to vote for me again because this time I will have seniority and that seniority could boost my authority here in the Congress by putting me in the leadership and making me chair a committee. And if I’ve been able to re-engineer whole parts of the District where no taxes were coming to the District without a vote, I ask them to try to imagine what I could do with my vote. Help me use the seniority I’ve banked to send me back to Congress in the 2018 election, and remember: June 19th is the primary.