Hooded, or Another Must-See from Mosaic 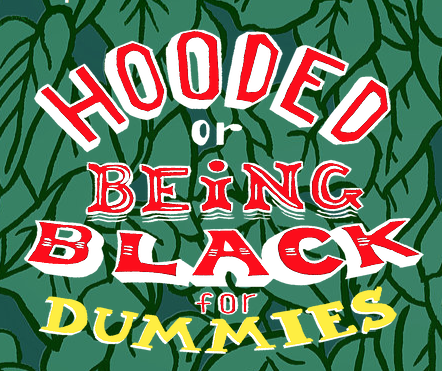 The third season of Mosaic Theater has brought us gems like Queens Girl in Africa, Vicuña and Paper Dolls, just to mention a few. As one of the closing plays of the season, they’ve restaged a smash hit from season two: Hooded, or Being Black for Dummies. The play, as much a comedy as a Chekhov play, tells the story of Tru (Jeremy Keith Hunter) and Marquis (Keith Royal Smith). They are both black boys growing up in Baltimore; or rather, Tru lives in Bawlmer and Marquis –adopted by white parents– lives in an unnamed tony suburb of Baltimore. They meet in a holding cell, both held in custody for no discernible crime other than being black and in the wrong place.

The 100 minutes that unfold may be funny –hilarious in some parts– but I have seldom laughed so mirthlessly despite the excellent comedic timing of the cast. Both main actors have a natural ease and rapport that instantly sell the initial jail setup, with Officer Borzoi (Frederick Strother) acting as the foil. Marquis’s overbearing yet well-meaning mother (Marni Penning) plays her white guilt for big laughs. Most of the cast plays double-duty, switching roles with ease and using their dualities to increase the stress of the situation.

Hooded is yet another play to watch and the staging in the more intimate Sprenger Theater allows for a closer, more personal experience. This play provides an emotional punch disguised as laughter –uneasy, difficult laughter that will leave your heart hurting. It’s also basic sensitivity training: A gilded mirror, held up to those who might need it most. I fervently hope to see the day this excellent play is mandatory reading in high school.

WHAT: Mosaic Theater’s Hooded, or Being Black for Dummies, bu Tearrance Arvelle Chisholm and directed by Serge Seiden

WHEN: Playing through June 3, 2018. For more information and tickets, click here.