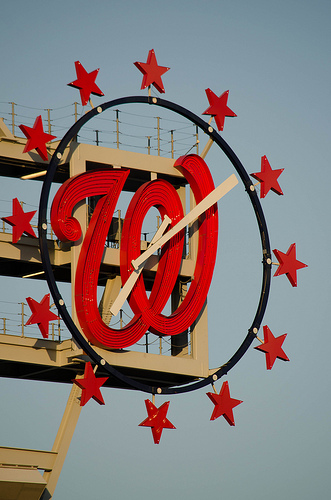 Photo of the Nationals “Clock” by user m01229, via our Flickr pool. This photo is six years old. (MHC)

A few minutes before the scheduled start of the Nationals home opener last week, I found myself in the stadium instinctively turning to check the time at what used to be a perfectly functional clock (see accompanying image).

Where once stood a lovely timepiece that would show the time of day with a pair of hands shaped like baseball bats, there was only a decorative curly W surrounded by a circle of 12 stars. In those happy days of yesteryear –lo, six years ago in the photo– the time was always available regardless of what might be displayed on the scoreboard, such as video replays, promotions, and the like.

Although it’s been four years since the hands of the clock were removed, long-time fans such as myself still look toward that Curly W and are saddened to find a broken clock. I know that this does not seem like anything close to the biggest problem facing the team, but it might be the easiest to fix. At least three professional baseball teams display working analog clocks in their stadiums: Cincinnati, San Francisco and of course Chicago. Do the Nationals want to be the one team that presents a broken clock?

I think you share my belief that one should always strive for excellence. Leaving the clock in its current state is akin to leaving a piece of food stuck in your front teeth all day because you can’t be bothered to locate a toothpick. We know the thing is a clock: The fact that it’s broken can’t be ignored. The inoperable clock is a metaphor for dysfunction, and this team and its fans deserve better.

During a fan Q&A in December 2015, Mark Lerner –the Nationals’ principal owner– commented, “I’m sorry to say it looks like it’s impossible to fix. I’ve been told the parts are just not available.” In a stadium where Max Scherzer can pitch a 20-strikeout game, where Anthony Rendon can have a game where he hits 6-for-6 with 3 home runs and 10 RBIs, I find it difficult to believe that resolving a simple mechanical problem is “impossible.” Our region is home to some of the top engineers in the world – surely a new mechanism can be obtained or built. It’s difficult to imagine some special controlled-access technology being used in a simple analog clock. Mr. Lerner went on to promise that the team would “replace it with something else, no later than the All-Star Game in 2018.”

Roy Roberts is a Nationals fan, a THIH reader and a bon vivant.

Have a strong opinion about something in our community? We’d love to give you a voice! Email us at info@thehillishome and tell us all about it.