Last week while researching tunnels, I chanced upon another tunnel here on the Hill. It’s not quite the same as those connecting the various Capitol Hill buildings, but one that came in handy in creating a new generation of Navy airplanes after the First World War: A wind tunnel.

Aviation was still a new technology in 1913, but there was a real push to refine it, with many different groups looking for ways of using this new form of transportation. The Navy had received their first plane – a Curtiss hydroplane – two years earlier, and used the Experimental Model Basin at the Washington Navy Yard to test out the aircraft’s properties on water. Now, however, they wanted to learn more about the aerodynamic aspects of their planes. Thus, they requested that Congress appropriate money to allow them to build a wind tunnel.

This was hardly new technology. The first wind tunnel had been built in 1871 and the Wright brothers had used one in 1901 to refine their flyer. The new wind tunnel was, however, to be the largest in the world. When it first was tried out in March, 1914, the chamber measured eight by eight feet. Its dimensions allowed testing on good-sized models.

David Taylor, newly promoted to Rear Admiral and Chief Constructor of the Navy, appointed William McEntee to be in charge of this new project. McEntee had made his name by organizing the first take-off of an airplane from a ship a little over three years earlier. The first year or so was spent calibrating the apparatus, making sure that it delivered data similar to that which was being determined at wind tunnels at MIT and in England. 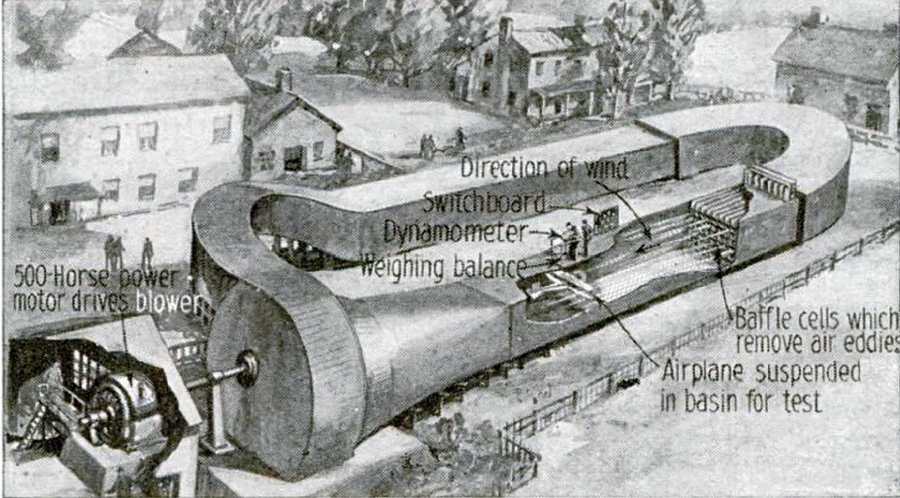 While testing proceeded apace, including work on the 82-A –the first plane built by the Navy– the need for it increased exponentially with the United States’s joining the first World War. Even before that, Taylor hired Dr. Albert Zahm (pictured above) to take over the lab. Zahm, a professor at Catholic University, had built a good-sized wind tunnel in 1901. The new director was instrumental in putting the work done at the Navy Yard on a much more scientific basis, including ensuring that all tests were adequately documented. The paper “Birth of U.S. Naval Aeronautics and the Navy’s Aerodynamics Laboratory” by David J. Haas and Eric J. Silberg, from which much of this information has been cribbed, has a table showing the results: between 1917 and 1919, 135 tests were run in the tunnel. About a third were complete airplane models, but also 15 percent were airships. The rest ran the gamut from instrumentation tests to bombs, and include a number of parts of airplanes. One particular test was that of a complete, full-sized airplane radiator, to ensure that it would be up to the job entrusted to it.

A number of the tests conducted between 1917 and 1918 were leading up to the Navy Curtiss airplane, best known for having completed the first flight across the Atlantic in 1919.

After the end of the war, new facilities were built in Carderock, Maryland, and the wind tunnel was at the Washington Navy Yard was shut down. The building no longer exists, but it used to be located roughly where the Cold War gallery of the Navy Museum is today.