One thing I love about living on the Hill is finding little reminders of the past in the oddest places. For instance, the other day I was walking down Massachusetts Ave NE towards Lincoln Park, and saw in the small triangle formed by the avenue, 9th and A Streets NE a set of iron posts connected by chains surrounding an interior park. It was the posts, and more accurately, the tops thereof, that caught my eye. On them is written “US” crossed with “PB&G.” To be entirely honest, I thought it was PB&C, but when searches for that text came back only with some disgusting Coldstone Creamery peanut butter and chocolate shake, I looked more closely and realized it was actually a G at the end.

So, what is the PB&G? A bit more searching turned up the answer: The Office of Public Buildings and Grounds. This was a part of the US Army Corps of Engineers founded in 1867 to take control of the many public lands within the District of Columbia.

The Office of Public Buildings and Grounds was key in creation of modern D.C., first in the work done to fill those areas of the Potomac west of the Washington Monument to create the land on which many of the city’s memorials are, and then to beautify the city. As Theodore A. Bingham (pictured), who joined the office in the early 1890s and headed it 1897 until 1901, wrote in his annual report in 1893:

If […] Washington is not the most beautiful and attractive city in America, surely as the capital city it should be made so, and the parks and park places so freely distributed through it by the wise foresight of the great man who laid it out, and which are conceded to form one of its chief attractions, should be maintained in the highest condition of improvement.

While at first only the main areas were under the purview of the Corps of Engineers, this began to change in the late 19th Century. A 1900 map produced by Bingham shows 301 of them, ranging from Reservation #1, the White House grounds plus Ellipse, to #301, just below Barney Circle, which has been today entirely subsumed by the Southeast Boulevard. (Note that this is not the same scheme under which the land southeast of Independence Avenue and 19th Street is Reservation 13; that area actually was not under the purview of the Corps of Engineers. What they have listed as Reservation 13 is on New York Avenue between 18th and 19th Streets NW, what is today Rawlins Park) 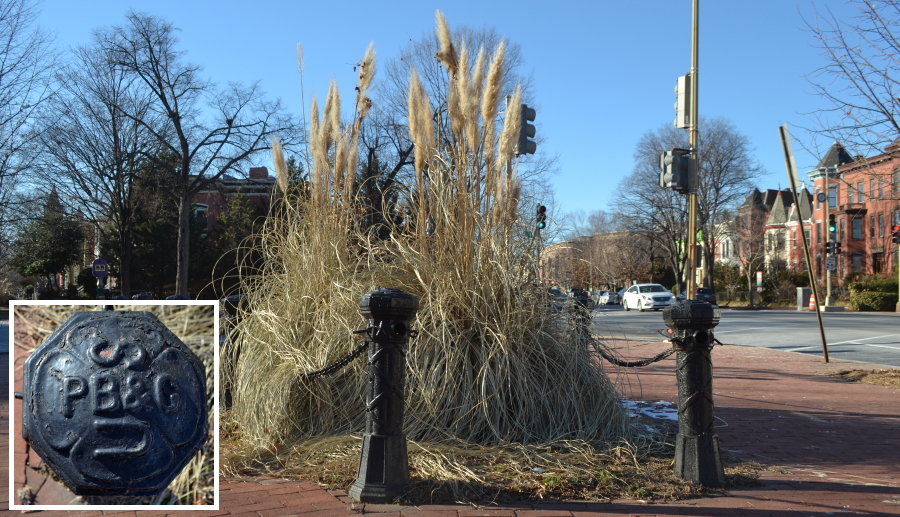 Reservation 87 today. Inset: Top of one of the cast iron poles. (RSP)

Under this scheme, the triangle at 9th and Massachusetts is number 87. While it is unlikely that hordes of 8th  graders will descend on this pocket park as one of D.C.’s “chief attractions,” Bingham did make sure that the smaller parks were, at the very least, taken care of and marked with the initials of his office.