But Seriously, DC Parks and Recreation Could Fix This 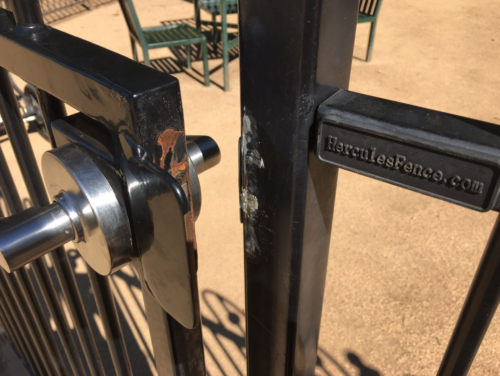 Photo of the damaged latch at Lincoln Park courtesy of Corinne Cannon, via Twitter.

A couple of weeks ago, I wrote about Major General Nathanael Greene’s broken stirrup – still broken as of this morning– and the dead tree at Stanton Park. Alert reader Steve left a comment saying that inaugurations signs were DDOT’s responsibility even though they were littering a National Park. Guess what got fixed as soon as I tapped our local authorities?

No, not the stirrup, silly. As if!

Stanton Park no longer has Inaugural debris. Reader Lyndsey Medsker also recently tweeted a photo of some Inaugural debris located on New Jersey Avenue SE, near the headquarters of the DNC. Did that one get cleaned up as well? Holler at us, Lyndsey! And by the way, if you have seen leftover signs that should have been picked up months ago, tag us on a tweet and let’s help DDOT clean things up.

But our post ignited the fire under reader Corinne Cannon’s rage. In the comments section on Facebook (where you should comment, too, so we know what’s bugging you), she told us about the fence around the children’s play area in the southeastern corner of Lincoln Park, and how the latch has been broken for some time. On Sunday, Corinne took to Twitter to vent her frustration as to why this relatively easy fix –one that we’re pretty sure DC Parks and Recreation could handle with little to no sweat– hasn’t been fixed in months. As with many of these little daily frustrations, the heart of the matter is that DC should have autonomy over all its parks. Why should the National Park Service maintain our parks if we have a perfectly capable agency to do that work?

Do you have any other minor or major annoyances that could be more easily fixed if DC had control of its own parks, budget, etcetera? Tell us in the comments!

(No annoyance too small, btw.)