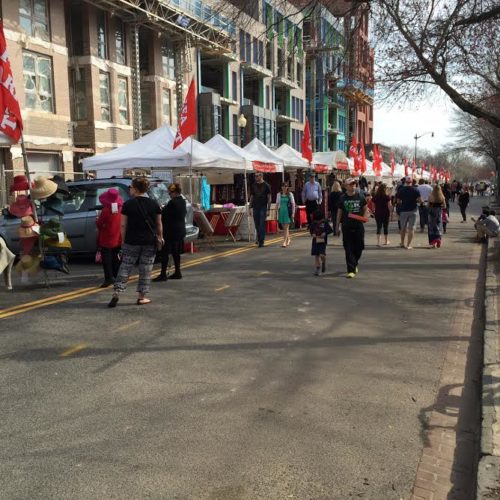 We have another sign that the Hine redevelopment project really is nearing its completion date: The weekend flea market vendors that have been setting up their tents in the 300 block of 7th Street SE  since construction began will be returning to the “Plaza at Hine” this fall.

There is no set date for when the move will happen yet, but the plan is for the vendors who have been using 7th Street between C Street SE and Pennsylvania Avenue to move to the newly-opened block of C Street between 7th and 8th Streets SE. This means that the “Plaza” is the actual street, which will be pedestrian-only on weekends during flea market hours.

The decision to reopen the 300 block of 7th Street SE to cars remains a debate.

In the spirit of fall weekends, Eastern Market is celebrating a homecoming of its own. Stanton Development and EastBanc, Inc. announced today that Eastern Market’s historic outdoor weekend flea market will return to its original home at The Plaza at the Hine School redevelopment project’s 700 Penn at Eastern Market. Saturday’s Capitol Hill Flea Market and Sunday’s The Flea Market at Eastern Market have signed three-year lease agreements and will once again move to the site of their long tenure this fall.

After two years on the 300 block of 7th Street SE, the flea market will move back to the plaza this year, which it originally occupied before the Hine School demolition. The newly opened C Street and The Plaza were designed to ensure the markets had a long-term home. As construction at 700 Penn at Eastern Market progresses, the street vendors will occupy 50 flea market exhibit spaces along the stone-paved and tree-lined C Street plaza, which now connects 7th and 8th Streets SE. New amenities at the space include Dutch-style flush curbs, decorative iron tree pit grates, outlets in tree boxes for lighting, and discounted parking for vendors.“We are delighted to bring home the original flea market concepts that define the footprint of Eastern Market each weekend,” says Anthony Lanier, president of EastBanc. “We look forward to our continued partnerships with this historic tradition.”

“We are delighted to bring home the original flea market concepts that define the footprint of Eastern Market each weekend,” says Anthony Lanier, president of EastBanc. “We look forward to our continued partnerships with this historic tradition.”

“We are thrilled to return to the plaza,” says Carole Wright, who operates Saturday’s Capitol Hill Flea Market. “This move will allow us to once again operate as an open-air market, not as a street fair.”Michael Berman, President of Diverse Markets Management (DMM), the company that runs the Flea Market at Eastern Market every Sunday, said “We look forward to working with Stanton-EastBanc and the 700 Penn team and expect to provide a great market in the nearly 35-year tradition of the Flea Market at Eastern Market. We are really excited to activate this new space.”

The Hine School Redevelopment project is a new mixed-use development, which includes a 156,000 square-foot office building, 162 apartment residences that are comprised of 46 units of affordable housing and 116 market-rate residential units, and 60,000 square feet of specialty shops, boutiques and restaurants. The Hine School Redevelopment Project’s commitment to locally owned retail and sustainability includes Gold and Silver LEED Certified designs, green roofs, car-sharing and underground bike racks and showers. Retailers at 700 Penn at Eastern Market will include ice cream shop Trickling Springs Creamery, home goods store Antiochia, District Veterinary Hospital, juicery Jrink, and Trader Joe’s grocery. Eastern Market is a public market in the Capitol Hill neighborhood of Washington, D.C., and for the past 125 years, it has been located on 7th Street SE.

About Diverse Markets Management
Diverse Markets Management (DMM) DMM is a DC-based firm specializing in the development and management of outdoor public exhibitor markets. DMM produces The Flea Market at Eastern Market every Sunday, the popular Downtown Holiday Market in December, as well as MarketSW, which will also commence its third season at The Lot SW. DMM is strongly dedicated to developing and maintaining a financially sustainable market while enhancing the ongoing integration of a market into the community. www.diversemarkets.net