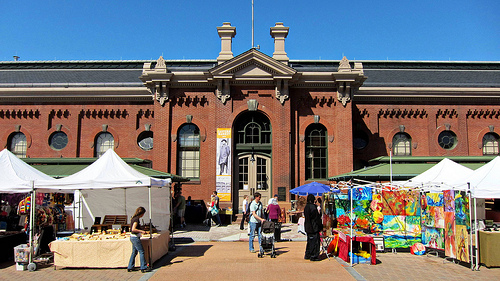 The debate over whether 7th Street SE should be closed to vehicular traffic on weekends appears to be back. The Eastern Market Community Advisory Committee (EMCAC) will hold a special meeting this Saturday, August 12, at 3 p.m. at Coldwell Banker Capitol Hill, 605 Pennsylvania Avenue SE, to discuss whether 7th Street between Pennsylvania Avenue SE and North Carolina Avenue, SE should remain closed to traffic on weekends.

While this has been discussed and debated many times in the past, and I thought it was settled, the debate is seeing renewed life as the Saturday and Sunday flea markets near their move to their new location on C Street between the Hine Project’s North and South Buildings on September 30.

All of 7th Street was open to vehicular traffic for years –from North Carolina Avenue to Pennsylvania Avenue SE. It was closed after the fire to allow for a place for displaced vendors to set up shop, and once the Market reopened, merchants argued that the street should be opened again to help with their business. As explained in a post at the time on We Love DC, “Stores along market row report[ed] a 35% to 75% drop in business since the road closures began.” A comment on the blog post from a business owner on Market Row indicated that their position was not well represented, however. Comments on our post about it were fairly split. (PS we still miss you, We Love DC!)

Prior to the fire, the street simply narrowed because of the trucks parking along the Farmers’ Line. While there was a time I didn’t hesitate to drive through there, I now cringe at the thought of dealing with the narrow street. However, it was convenient when I was shopping for more than I could carry home if I was on foot. On the other hand, I’ve managed just fine since the street closed in 2007, even through three months of being on crutches due to a broken ankle.

Having experienced both arrangements for years, I really want what’s best for the businesses along 7th and C Streets. If they say opening the road up on weekends will help, let’s give it a try. Between the Market fire and the Hine Development, they have lived through a decade of constant construction. Speaking of which, let’s all put our money where our mouths are and do some shopping there! Support your local businesses because our neighborhood wouldn’t be what it is without them.

If you would like to have your opinion be considered, attend the meeting or send comments to EMCAC Chair Donna Scheeder at donna_scheeder@comcast.net

One response to “Should 7th Street SE Remain Open on Weekends?”