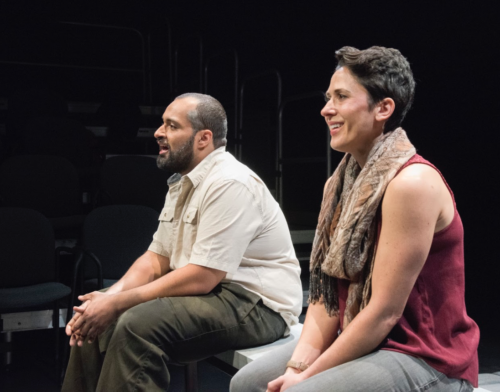 Ahmad Kamal as Samer and Alyssa Wilmoth Keegan as Talia in The Return at Mosaic Theater Company of DC, June 7-July 2, 2017. Photo by Stan Barouh and courtesy of Mosaic Theater.

If you go to the theater to feel good, “The Return” at Mosaic Theater is not the play for you. As with all the other Mosaic Theater plays, the play challenges your assumptions and the things you take for granted, repeatedly, as the performers unspool the story together.

The actors play easily off each other and set a pace that feels less like a play and more like being an observer behind two-way glass. Co-written by Hanna Eady, a Palestinian-American and Edward Mast, an American, “The Return” tells a story of conflict, loss, and love from a point of view not often seen by American audiences.

Staged in the smaller Sprenger Theater at the Atlas Performing Arts Center, the staging makes the audience almost complicit in watching a soured romance between a Palestinian man, Samer (played by Ahmad Kamal), and an Israeli woman, Talia (played by Alyssa Wilmoth Keegan). The intimacy of the set and the way the performers interact saturates the air with sexual tension and frustration. It’s uncomfortable, but the “good” kind of uncomfortable.

The set and lighting, both designed by Colin K. Bills (a Woolly Mammoth company member) is the third cast member in this lean drama. The elegant audio track, designed by Sarah O’Halloran, takes the viewer on an aural journey from the congested streets of a city to a traffic stop. Throughout, the soundtrack immersed us completely in the drama and wordlessly filled in parts of the story. Thanks to a lighting design that is seamlessly intertwined with the audio, the actors appear as if by magic. The small rectangular space is maximized in a powerful way.

The acting maintains the excellent level that has been the norm for the whole season. This is the last play in the Mosaic Season, and it is –dare we say it?– a perfect way to close their run.

Saying much else could ruin the emotional rollercoaster for some. Do yourself a favor and go see this play; while you’re at it, become a Mosaic Theater supporter, so this kind of mind-blowing theater can keep opening minds and hearts: http://www.mosaictheater.org/support

WHAT: The Return, by Hanna Eady and Edward Mast, directed by John Vreeke

WHEN: Through July 2, 2017. For tickets, go to http://www.mosaictheater.org/tickets