Last week, I was running out of time, so I simply put up a rerun with a tiny bit of research to add a little more detail. While doing so, I stumbled onto information that I dearly wish I had known when I wrote my book on the D.C. Emancipation Act.

When Abraham Lincoln moved to the District of Columbia in 1847 to represent Illinois’s 7th congressional district, he found himself living in a territory which allowed slavery for the first time since he was seven years old. Lincoln found himself confronted with the realities of this peculiar institution, and he would later write of its effect on him.

One infamous episode occurred while Lincoln was living in Washington. In fact, it happened in the boardinghouse that he was staying in. A young man who was held in slavery, but was in the process of buying himself free by working in Mrs. Sprigg’s boardinghouse, was sold by his owner in spite of the fact that he had already paid off most of his price. Joshua R. Giddings (pic), Representative from Ohio, and one of Lincoln’s mess-mates at Mrs. Sprigg’s, described the scene a few days later in a speech on the floor of the House of Representatives:

[O]n Friday last, three armed persons engaged in the internal slave trade, entered a dwelling in this city and violently seized a colored man, employed as a waiter in the boarding-house of several members of this body, and in the presence of his wife gagged him, placed him in irons, and with loaded pistols forced him into one of the slave prisons of this city, from which, it is reported, he has since been despatched for the slave market at New Orleans;

[S]aid colored man had been employed in said boarding-house for several years, had become well and favorably known to members of this House, had married a wife in this city, and under a contract to purchase his freedom for the sum of three hundred dollars, had by great industry paid that sum within about sixty dollars;

[O]utrages like the foregoing have been of common occurrence in this district, and are sanctioned by the laws of Congress, and are extremely painful to many of the members of this House, as well as in themselves inhuman 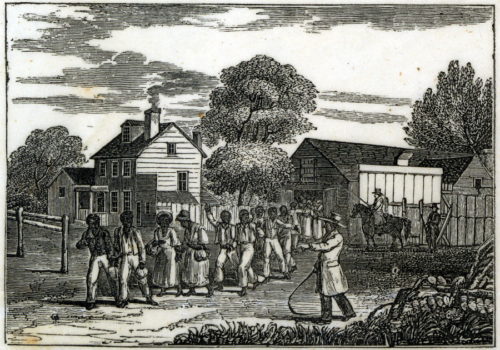 The Neal Slave pen in Washington, which was across the street from the WIlliams pen, in 1836 (LOC)

One thing that Giddings did not mention was the young man’s name, nor was his fate described on that day. In Gidding’s 1864 book History of the Rebellion, he describes going to the slave pen owned by William Williams in hopes of rescuing him – but too late. The owner of the slave pen said that the young man was already in Alexandria, and was “on board the ship that would sail that night.” Giddings concludes the episode:

Passing through the gate, they turned to look at this “slave-pen,” standing in the midst of our national metropolis. All was dark and silent The whole contour of the buildings and grounds appeared in harmony with the piratical vocation to which they were appropriated. Its inmates, both slavedealers and victims, appeared to be isolated from all sympathy and association with the moral world around them, a they were separated physically from all other buildings of the city.

Fortunately, Giddings did not give up at this moment, but persevered. We will look at what he managed to do next week.