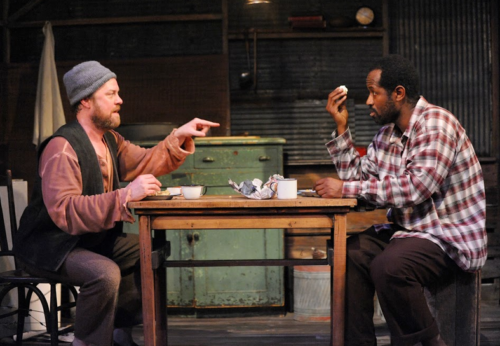 If you haven’t attended a play at Mosaic Theater, 1333 H Street NE, inside the Atlas Performing Arts Center, I strongly recommend you do. Not only is it great to have contemporary theater right in our own backyard, but the quality of the acting, the thoughtfulness that goes into choosing the season’s plays and the zeitgeist-y timeliness of each and every play offered in the season work together to create exciting, thought-provoking art.

I was lucky to attend not just one but two opening nights the past two Sundays for the plays “Blood Knot” and “A Human Being Died That Night.” Both plays run in repertory through April 30, 2017. More on both plays below:

“Blood Knot”: The absurd tries to make sense of the absurd

Athol Fugard’s 1961 play about the complex relationship between a light-skinned and a dark-skinned brother living in the outskirts of Port Elizabeth is a moving, frustrating allegory about seeing or not seeing the point of view of another person. The deceivingly simple plot, where Morris helps Zachariah find a pen pal –only to discover she is a white girl whose brother is a policeman– lay the foundation for a universal reflection on family, on the love between siblings, and on feeling like an outsider even within the embrace of your own kin.

Throughout the play, we are riveted and morally tested by every twist and turn of the brothers’ revelations and their cathartic role-play at the end. The intimate staging, the steady pacing, and the meticulous use of props showcases the talents of Nathan Hinton as Zachariah and Tom Story as Morris, as well as the excellent directing of Joy Zinoman.

I had one qualm, however: I found the South African accents a little disconcerting and not conducive to the suspension of disbelief. As Hinton and Story took us on a journey to a difficult place in the heart, I constantly wondered how good and accurate their accents were. As I don’t know many people from South Africa against whom to judge the quality of their pronunciation, the accent became more of an obstacle to my personal enjoyment, though I understand the obvious reasons why the director made the choice. At 2 hours and 20 minutes, with a 15-minute intermission, the play takes you on a difficult journey that pays off with a sad, powerful ending.

“A Human Being Died That Night”: Engrossing and necessary storytelling

Without spoiling anything for anyone, the moment where Eugene de Kock (played by Chris Genebach) utters the title line to a riveted Pumla Gobodo-Madikizela (Erica Chamblee) is a great moment in acting. It hits an emotional high note in a story many of us know from historical accounts and news sources –and which many of us barely know at all.

De Kock, a former undercover policeman responsible for many atrocities during the Apartheid era and who was known by the sobriquet “Prime Evil” had a series of conversations with psychologist Gobodo-Madikizela during the period of 1997 to 2002. In the course of these exchanges, adapted into a play by British dramatist Nicholas Wright, we are forced to confront our preconceptions of evil and of the consequences of our actions, as well as to consider what the nature of forgiveness is all about.

Godobo-Madikiezla worked for the Truth and Reconciliation Commission in South Africa, which was created in 1994 after the abolition of Apartheid in the country; however, she wanted to interview de Kock for reasons of personal interest. With each visit we are given an insight into the healing of a fractured country, as well as into how each character comes to terms with their demons and their guilt. The play has such momentum, you can barely feel 80 minutes have gone by.

WHEN: Now through April 30, 2017. Tickets through this link: http://www.mosaictheater.org/tickets