The beginning of the Civil War brought all sorts of troubles to the Washington Navy Yard. On top of the need to ramp up the production of ordnance, there was the issue of saboteurs, the question as to how to secure the yard; not to mention, the logistics of putting up hundreds of troops and keeping them from misbehaving, all while ridding the yard of southern sympathizers.

The last thing needed was for a paymaster to develop a gambling problem and embezzle the Navy payroll to pay for it– which is exactly what happened.

Benjamin Franklin Gallaher was born circa 1825, the son of John Gallaher (pic), a western Virginia newspaperman and politician. The senior Gallaher’s big break came when President Taylor appointed him auditor in the Treasury. Benjamin moved to Washington, along with his father, and became an auditor in the Treasury as well. From here, he became a purser in the Navy in 1852, serving first on the USS St. Louis, then later the USS Preble, USS Plymouth, and USS Powhatan. In late 1857, Gallaher decided to switch to shore duty, buying a house at 10th and K Streets NW and giving a bond for $25,000, which allowed him to become a paymaster, a position that he took at the Washington Navy Yard.

On September 4, 1861, Gallaher sold a check for $1,500 to three bankers in D.C. However, when it was presented to the Treasury for payment, it was refused. Somewhere along the line, it had become clear that the money that Gallaher had been cashing against the Treasury’s account were not good: he had been embezzling federal monies.

The reason for this soon became clear: Gallaher had a gambling problem. More exactly, he had become a frequenter of a game called Faro Bank. This fairly simple game is essentially a combination of roulette and cards, played by placing your bet on an open suit of cards, with the winners being those whose cards are drawn. Like roulette, the odds are fairly even, with only certain conditions giving the dealer an edge. Obviously, Gallaher did not play the odds terribly well, managing to lose some $100,000, a deficit he had attempted to make up out of the Washington Navy Yard’s payroll.

Gallaher was, obviously fired and a replacement was found. Remarkably, Gallaher was able to put up enough money to get himself out of jail, and he found himself dismissed from the Navy. However, that particular slight Gallaher and his father both  felt was intolerable. Gallaher Sr. protested to the President, requesting that Gallaher be allowed to resign instead of being fired. Lincoln acquiesced, and that was the end of Benjamin Franklin Gallaher’s Navy service.

It was not, however, the end of his shady deals. Two years later, a short (but breathless) article in Harper’s Weekly described the after-hours stock market that Gallaher and his brother, Robert Gallaher, had opened in New York. 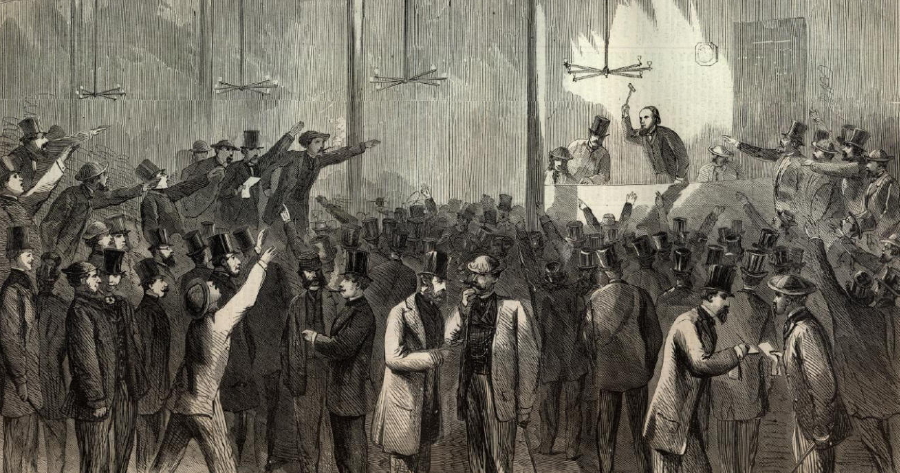 ” The scene here represented is one that may be seen nightly at the new stock-board in the Fifth Avenue Hotel, where operators, whose eagerness for speculation is not satisfied by their day experience, congregate in numbers and gamble far into the night.” Harper’s Weekly, May 7, 1864. (sonofthesouth.net)

After the war, Gallaher settled down in Washington again, and seems to have kept his nose clean, earning a meager living as a claim agent. Only late in his life does he reappear in the pages of the newspapers, when he was “adjudged to be insane” and sent to St. Elizabeths hospital. A year later, in 1903, he died. His obituary in the Alexandria Gazette mentioned only his father, none of his service – or his shenanigans – during the Civil War.